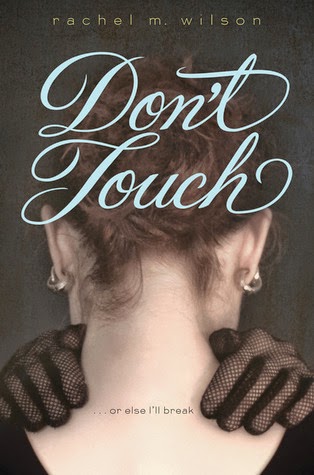 From Goodreads:
A powerful story of a girl who is afraid to touch another person's skin, until the boy auditioning for Hamlet opposite her Ophelia gives her a reason to overcome her fears.

Step on a crack, break your mother's back. Touch another person's skin, and Dad's gone for good.

Caddie can't stop thinking that if she keeps from touching another person's skin, her parents might get back together... which is why she wears full-length gloves to school and covers every inch of her skin.

It seems harmless at first, but Caddie's obsession soon threatens her ambitions as an actress. She desperately wants to play Ophelia in her school's production of Hamlet. But that would mean touching Peter, who's auditioning for the title role—and kissing him. Part of Caddie would love nothing more than to kiss Peter—but the other part isn't sure she's brave enough to let herself fall.

Perfect for fans of Laurie Halse Anderson, this debut novel from Rachel M. Wilson is a moving story of a talented girl who's fighting an increasingly severe anxiety disorder, and the friends and family who stand by her.

My Review:
The whole idea of this book, of having games in your head that prevent your skin from touching another's skin, and her dad won't come back, the world would end, that wouldn't be fun to live with! But Caddie does, even as she tries to fight it.

So like I said in my Da Vinci's Tiger review, I don't get art. And acting's an art, and one, that for me, the problem of understanding is compounded is that it's art about people, and I don't understand people, either. Yeah.

The relationships between Caddie, and the group that became her friends, I really enjoyed them. They were real, with ups and downs. And while it was hard for everyone, Caddie because of her games, her friends because they didn't know why, they worked through it!

There were also the relationships with her family, her mom's who has been moving on in her life since her husband, Caddie's dad, left. Caddie's dad, who Caddie didn't know how to talk to. And her brother. They were a part of this book and a reason why it was so good!

Really awesome to read this book! Really great ending, and yeah, this book was just so enjoyable!