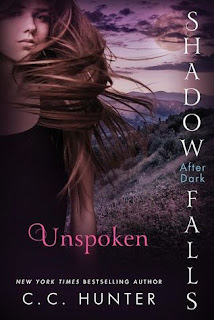 Despite her superspeed, inhuman strength, and enhanced senses, Della Tsang's new life as a vampire certainly hasn't been a walk in the park. Especially since she was "reborn" and found herself bound to the mysterious, infuriating, and hunky Chase. But if there's one thing that's always kept Della going, it's her dream of being an elite paranormal investigator.

When Della tries to solve a twenty year old murder--and clear her father's name--she uncovers secrets about the vampire council and the boy she's bonded to. Feeling even more betrayed by Chase because he's kept so much from her, she's determined to keep him as far away from her heart as she can. But together they work a cold case that will lead them into the darkest and ugliest vampire gangs in Texas... and into the scariest reaches of her heart.

My Review:
I loved reading this book! Things were just fantastic, we've been around these characters for a while, and then having this ending was just fantastic! I loved how things were resolved both in the romance and in the mystery! So awesome!

This is the book where Della chose her guy, between Chase and Steve, and yeah, it's kinda a big thing through the series, but a few things brought it to a close. Like Steve had chosen his future over her, proving that they weren't in love. And Chase prove to be a pretty great guy!

For most of this book (and the end of Eternal) I thought that it was her uncle that killed her aunt, because he's the identical twin of her dad. But then Chase proved that that wasn't the case. And how it all ended up, that was about the best case scenario!

This is the mystery that has taken up the whole series, whether we knew it or not. And I think it was solved very well, that it was because of her uncle her aunt died, but he didn't kill her, while her dad only pulled out the weapon, because she was in pain. That was about the best way for that to end!

Yeah, loved this book a whole ton, so great, and part of a great series!