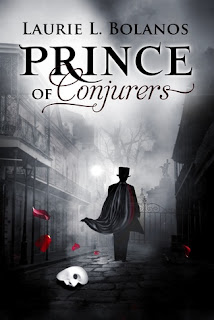 From Goodreads:
Based on Gaston Leroux's classic novel, The Phantom of the Opera.

What if the Phantom of the Opera changed his mind after releasing Christine and Raoul?

What if he staged his own death?

What if he intended to claim Christine as his own?

Weeks after staging his own death, Erik follows Christine and her husband to New Orleans, discarding his Phantom of the Opera persona and leaving his past behind. Now as the Prince of Conjurers, he seeks assistance from New Orleans' Voodoo Queen, Marie Laveau. His mission: to procure Christine's soul. When Erik conjures his beloved into another woman's body, it doesn't work quite as he plans. As he tries to fix his mistake, he receives help from an unexpected source, and Erik accesses a power he never knew he possessed.

After losing her cheating husband in a painful divorce and her house to Hurricane Katrina, Juliana François decides to start a new life. She buys a fixer-upper in the French Quarter filled with hidden artifacts, including an unusual bracelet that changes the course of her life. With the help of attractive antiquities expert Heath Smith, she learns of the bracelet's fascinating history. Then an unexpected reading from Star, a Voodoo practitioner, who believes in past lives, leaves her with more questions than answers. Julie takes the ultimate risk to discover who she was...before she was born.

My Review:
This book was just so awesome! It's been a long time since I've heard The Phantom of the Opera-I've never actually read it, but my mom loves the audio-and then to have this book based on the story, and taking it further? So. Awesome!

I enjoyed the narrative of the story, of the way that it went back and forth from Eric's POV and Juliana, from the beginning when they were in different times, to when they were in the same time, that was the best!

Once Julie thought that as it turns out, the world revolved around her, because her ex-husband and ex-best friend were Raoul and Christine. Yeah. Turns out that it wasn't the world, but how these characters were connected, and part of a bigger plot in the book!

We really only got hints of that bigger plot, like Eric's dad, and who he turns out to be, and who Eric and Julie turn out to be! Really awesome, and the past lives thing was really cool, and really interesting to read!

Yeah, this book was just really fantastic and enjoyable!