We Have the Cover of Violet Grenade!!!!

Yeah, we have the cover of Violet Grenade by Victoria Scott! And it's so awesome! 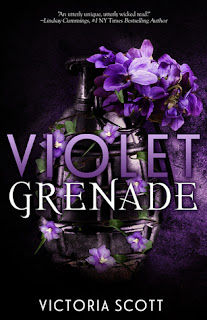 From Goodreads:
DOMINO: A girl with blue hair and a demon in her mind.

CAIN: A stone giant on the brink of exploding.

WILSON: The one who will destroy them all.

When Madam Karina discovers Domino in an alleyway, she offers her a position inside her home for entertainers in secluded West Texas. Left with few alternatives and an agenda of her own, Domino accepts. It isn’t long before she is fighting her way up the ranks to gain the madam’s approval. But after suffering weeks of bullying and unearthing the madam’s secrets, Domino decides to leave. It’ll be harder than she thinks, though, because the madam doesn’t like to lose inventory. But then, Madam Karina doesn’t know about the person living inside Domino’s mind.


Yeah, this cover is pretty literal on the title, and the title is taken from the story, that Domino feels like her mind is a grenade, and apparently violet is one of the ranks. Yeah. It's a pretty awesome cover! What about you guys? Happy reading!
Posted by Louisa @ Words I Write Crazy at 11:40 PM