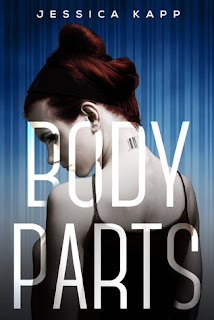 From Goodreads:
People would kill for her body.

Raised in an elite foster center off the California coast, sixteen-year-old Tabitha's been sculpted into a world-class athlete. Her trainers have told her she'll need to be in top physical condition to be matched with a loving family, even though personal health has taken a backseat outside the training facility. While Tabitha swims laps and shaves seconds off her mile time, hoping to find a permanent home, the rest of the community takes pills produced by pharmaceutical giant PharmPerfect to erase their wrinkles, grow hair, and develop superhuman strength.

When Tabitha's finally paired, instead of being taken to meet her new parents, she wakes up immobile on a hospital bed. Moments before she's sliced open, a group of renegade teenagers rescues her, and she learns the real reason for her perfect health: PharmPerfect is using her foster program as a replacement factory for their pill-addicted clients' failing organs. And her friends from the center, the only family she’s ever known, are next in line to be harvested.

Determined to save them, Tabitha joins forces with her rescuers, led by moody and mysterious Gavin Stiles. As they race to infiltrate the hospital and uncover the rest of PharmPerfect's secrets, though, Tabitha finds herself with more questions than answers. Will trusting the enigmatic group of rebels lead her back to the slaughterhouse?

My Review:
I really enjoyed reading this book! Man, the whole concept annoyed me so much, that people would treat their bodies so badly with these drugs, that a company decided to raise people for healthy body parts to sell.

I mean, I know I'm not perfectly healthy, but I don't need to change my organs. Not saying that people who need new organs are at fault at any way, but these people are taking drugs that they don't need and are causes these problems, that the solution is harvesting from these kids, yeah, that's not cool at all.

I really enjoyed meeting Tabitha and her friends. She's always thought that they were an orphanage, and to excel to prove that they should be adopted. Which is really cruel, given that those that are "adopted" are actually harvested for their organs, which is totally wrong.

The ending was a thriller kind of vibe, with threats at basically every turn. They went from one threat to another, all coming from the same area, but different people. And then it wasn't, and they had the law on their sad, which was really fantastic and made for a really great ending!

I really enjoyed reading this book, it was really awesome!