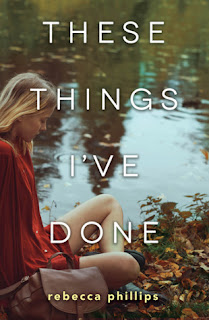 From Goodreads:
A haunting and beautiful YA novel that is perfect for fans of Courtney Summers and Jessi Kirby, These Things I've Done is the story of a seventeen-year-old girl who accidentally caused her best friend's death and, a year later, is still grappling with the consequences.

BEFORE: Dara and Aubrey have been inseparable since they became best friends in sixth grade. Dara is the fearless one, Aubrey the prodigy, yet despite their differences, they support each other unconditionally. However, as they begin their sophomore year of high school, cracks in their friendship begin to form, testing the bond they always thought was unbreakable.

AFTER: It's been fifteen months since the accident that killed Aubrey, and not a day goes by that Dara isn't racked with guilt over her role in her best friend's death. Now, after spending a year away from home in order to escape the constant reminders of what happened, Dara is back at her old high school to start her senior year. Dara thought the worst thing about coming home would be confronting the memories of Aubrey that relentlessly haunt her, but she soon realizes it isn't half as difficult as seeing Ethan, Aubrey's brother, every day. Not just because he's a walking reminder of what she did, but because the more her feelings for him change, the more she knows she's betraying her best friend one final time.

My Review:
I really enjoyed reading this book! I mean, it's not an easy thing, being involved in an accident that killed your best friend, that would really, really suck. Just seeing that would be horrible, but having tried to help, but her friend still dying anyways...that's horrible. Oh, and that her classmates think that she deliberately killed Aubrey, that she was happy about that. Not cool!

I really enjoyed the way that this story was told, alternating chapters of the present, and of the sophomore year before the accident happened. We found out how they got to that point, what changed Dara from this fun and dare-devil who accepts all dare, into a shy, quiet and keeps to herself girl in that year gap.

I really enjoyed the relationship that Dara had with Aubrey and Ethan, and her relationship she had with Ethan after Aubrey's death. Honestly, it wasn't very different, they were still close, this didn't break them. She had doubts, but it still worked, and it was really special!

When we got to the point where the accident happened, we had a pretty good idea of what had happened. Maybe not quite the specifics, but what led up to it, yeah, that was really important because it was why they looked like they were arguing before Audrey was hit by the truck. It just all came together for a really amazing ending! Sure, there was hurt, but life goes on, and love happens!

This was a really fantastic book, and I just really enjoyed it so much!