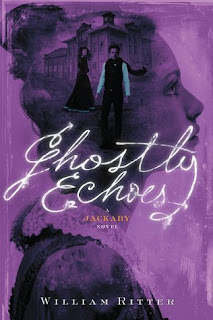 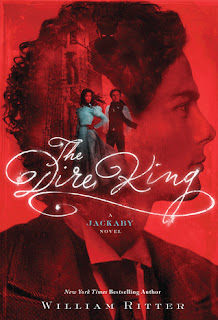 From Goodreads:
"Tread lightly, Miss Rook," warned Mr. Jackaby. "It would not do to push Miss Cavanaugh too far or too fast."

Jenny Cavanaugh, the ghostly lady of 926 Augur Lane, has enlisted the investigative services of her fellow residents to solve a decade-old murder - her own. Abigail Rook and her eccentric employer, R. F. Jackaby, dive into the cold case, starting with a search for Jenny's fiance, who went missing the night she died. But when a new, gruesome murder closely mirrors the events of ten years prior, Abigail and Jackaby realize that Jenny's case isn't so cold after all.

Fantasy and folklore mix with mad science as Abigail's race to unravel the mystery leads her across the cold cobblestones of nineteenth-century New England, down to the mythical underworld, and deep into her colleagues' grim histories to battle the most deadly foe she has ever faced.

Ghostly Echoes features its much-loved quirky, courageous characters and sly humor in the scariest and most exciting volume yet.

From Goodreads:
The fate of the world is in the hands of detective of the supernatural R. F. Jackaby and his intrepid assistant, Abigail Rook. An evil king is turning ancient tensions into modern strife, using a blend of magic and technology to push Earth and the Otherworld into a mortal competition. Jackaby and Abigail are caught in the middle as they continue to solve the daily mysteries of New Fiddleham, New England — like who's created the rend between the worlds, how to close it, and why zombies are appearing around.

At the same time, the romance between Abigail and the shape-shifting police detective Charlie Cane deepens, and Jackaby's resistance to his feelings for 926 Augur Lane's ghostly lady, Jenny, begins to give way. Before the four can think about their own futures, they will have to defeat an evil that wants to destroy the future altogether.

My Review:
Oh, wow, these books were just so excellent! This series has been quirky and amazing to read, and so much happens in these books, that I'm glad that I found this series after The Dire King had already been published, because that meant no waiting, which would've been evil!

Ghostly Echoes was the investigation into Jenny's death, and so much happens in it! Like, we met the pale man, and he isn't the head of the bad guys. So much happens in this book, and answers are found, and they have a firm understanding of what they're facing, which is good!

The Dire King was either preparations for the clash, or the clash. Sure, they didn't know who the Dire King was, but they knew his plan, and came up with their own to stop him. Which had interesting results! But oh, that ending! That was so topsy-turvy, so much happened, and so unexpected! But so great to read!

We need a 5th book! First off, to see how the investigations go with Abigail being the Seer. And also, because we didn't get Jackaby's real name! These are details I so desperately want to know! Well, also so we can spend more time with these characters in this world!

I just absolutely loved reading these books, and I can't wait to read what William Ritter writes next!