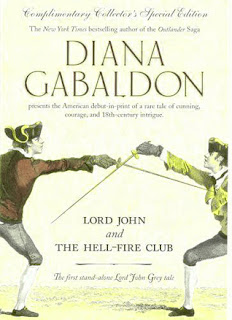 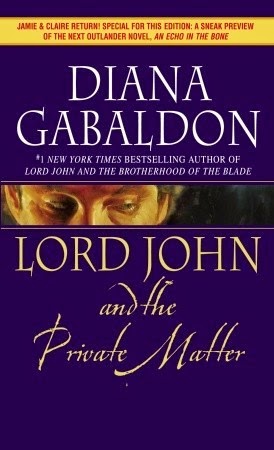 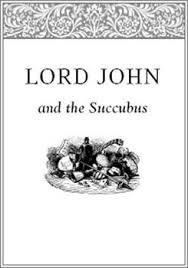 From Goodreads:
Outlander character Lord John Grey finds himself in 19th-century London investigating the death of a red-haired man. Soon he is mixed up in the affairs of Sir Francis Dashwood and his notorious Hellfire Club.

From Goodreads:
In her New York Times bestselling Outlander novels, Diana Gabaldon introduced millions of readers to a dazzling world of history and adventure — a world of vibrant settings and utterly unforgettable characters. Now one of these characters, Major Lord John Grey, opens the door to his own part of this world — eighteenth-century London, a seething anthill of nobility and rabble peopled by soldiers and spies, whores and dukes. Great Britain is battling France for supremacy on three continents — and life is good for a soldier.

The year is 1757. On a clear morning in mid-June, Lord John Grey emerges from London’s Beefsteak Club, his mind in turmoil. A nobleman and a high-ranking officer in His Majesty’s Army, Grey has just witnessed something shocking. But his efforts to avoid a scandal that might destroy his family are interrupted by something still more urgent: the Crown appoints him to investigate the brutal murder of a comrade in arms, who may have been a traitor.

Obliged to pursue two inquiries at once, Major Grey finds himself ensnared in a web of treachery and betrayal that touches every stratum of English society — and threatens all he holds dear. From the bawdy houses of London’s night-world to the stately drawing rooms of the nobility, and from the blood of a murdered corpse to the thundering seas ruled by the majestic fleet of the East India Company, Lord John pursues the elusive trails of a vanishing footman and a woman in green velvet, who may hold the key to everything — or nothing.

The early days of the Seven Years War come brilliantly to life in this historical mystery by an author whose unique and compelling storytelling has engrossed millions of readers worldwide.

From Goodreads:
Set in 1758, the story finds Lord John in Prussia serving as the English liaison officer to the First Regiment of Hanoverian Foot. Briefly stationed at the town of Gundwitz with a group of English and Hanoverian soldiers, Major Grey is at first skeptical when he receives reports of a local succubus victimizing a number of men and murdering a Prussian soldier. Accompanying the town Buergermeister to a graveyard in his search for the creature's resting place, Grey stumbles upon the corpse of an English soldier, which only feeds the superstitious fears of the soldiers and townspeople. While attempting to solve the mystery, Grey tries to navigate his perhaps-mutual attraction to the dashing Hanoverian Captain Stephan von Namtzen, as well as to deflect the advances of the beautiful young widow Louisa, Princess von Lowenstein, at whose castle both men are staying.

My Review:
It may have taken me 3 years, but I finally got around to reading these books! Yeah! I'm really happy with that, because yeah, my head is weird, and I really want to read more of the Outlander series, but I can't until I finish this series because it takes place during the timeline of Voyager! Yeah.

I really enjoyed being in Lord John's head. It was different then being in Claire's, he has a different perspective, he's gay in a time where some of the punishments seem to be whipping and such. He's a pretty important character for both Voyager and Drums of Autumn, so really enjoyed these stories!

Hellfire Club was really short, but it was a great introduction to this series! This takes place after he's left Jamie in the service of the English family, so he's still pretty fresh in John's mind. But he has a lot to do, mysteries to solve and being a soldier and all that.

I really enjoyed the mysteries in each book. There were deaths in each one, and while they had different levels of impact-a guy who he was going to meet, a possible spy, fellow officers, they were all really interesting to watch him investigate and solve them!

These stories were really fantastic, and I can't wait to finish the rest of this series!

Lord John and the Hellfire Club:

Lord John and the Private Matter:

Lord John and the Succubus: