Week 42 Review: Knocked Up By My Best Friend's Dad 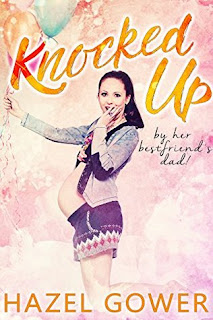 My Review:
This book was a guilty pleasure! It won't be for everybody given that she's one year older than his son, there's only 15 years between them. And the sexy scenes are pretty graphic. This book was like the sundae with the cherry on top of guilty pleasures!

Having seduced her best friend's dad,and then ending up pregnant, not exactly an ideal situation. And given that her best friend is in love with her (but she doesn't know it) is an added complication. So delicious to read!

I do have a complaint. There were some lines that said what I'm pretty sure was the opposite of what they meant. While this is a novella, and pretty sure, well, it could've used a bit more editing, just to eliminate those bits of reader confusion!

My one big wish at the end of this book? That they had another multiple pregnancy. Even twins. But yeah, having triples and then 5 single pregnancies is a lot of babies in 8 years! But a lot of cuteness! Oh, well! And I wonder if her parents ever became a problem for them! Sequel potential!

This was a really fantastic read!