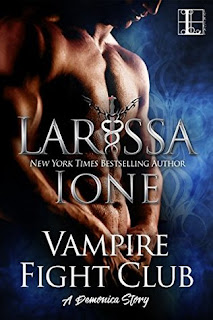 From Goodreads:
New York Times bestselling author Larissa Ione tempts you into the darkly irresistible world of Demonica, populated by angels and demons, shifters and humans, all with a thirst that must be quenched . . .

When a wave of violence that hits too close to home forces shapeshifter and underworld nurse Vladlena Paskelkov to go undercover, her first stop is a haven of vice—with a dangerously sexy vamp in charge . . .

Legendary, jaded, Nathan Sabine is the manager of Thirst, a wildly popular vampire club—and secret underground blood arena. But Nathan, a rare daywalker, possesses other, even more explosive secrets, as does his beautiful new medic, Vladlena. The one thing they can't conceal is the lust that simmers between them . . .

Now, in an underworld divided by revelry and violence, debauchery and vengeance, Nate and Lena will discover which risks are worth taking—and which desires demand surrender . . .

My first review of Vampire Fight ClubMy Review:
I really enjoyed reading this story again! I actually wasn't sure if I'd read this before, and I had, but just forgot. But I'm glad that I did read it, because apparently it's a prequel of sorts to Base Instincts, which I've been meaning to read for awhile, so hopefully I'll read that soon!

You have to feel bad for Lena, her two brothers keep trying to kill her, the one one who didn't is killed himself, and the events of this book happen. And there's a few revelations, like her biological father isn't the same guy as the dad who raised her, which causes some problems, because her bio father wasn't a hyena like Lena's mom, which causes some trouble with shifting!

Nate has waited almost 100 years for vengeance-but the anger fueling him died out. I mean, he was married to her but circumstances tore them apart. And when he finds her again, she's with the guy, but he seduces her back, and then the guy chases them and kills her. That's just awful. She was a person, and she could make her own decisions, like who, if any, she wanted to be with!

Really enjoy how things escalated and were dealt with! That she can shift, and won't die in a matter of weeks, and he got his revenge, and they're alive and together! That's just great, and made for an excellent ending!

Loved this novella, and I can't wait to read more!