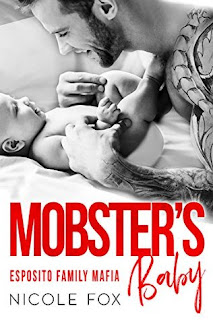 From Goodreads:
I'm pregnant with the mobster's baby.
I broke the rules – I slept with a mobster.
One mistake would have been bad enough.
But now that I’m carrying his baby… my whole world is about to come crashing down.
Because the bad boy is coming to claim what’s his.

I've always been a good girl.
I looked the part, acted like it.
The politician's daughter, as prim and proper as they come…

I was dying to know what it felt like to be free.
To be wild.
To be bad.

So I crossed the tracks and did what I never, ever should have done.
I let Tony Esposito claim me.
He was dark and violent and dangerous – everything I'd been kept far away from since the day I was born.

And my god, it was incredible.

My throat was raw from moaning.
My knees rug-burned and sore.
But I felt alive for the first time in my life.

Only one problem:
My transgression didn't end when he dropped me off.

The mobster left something in me…
And he's coming back to get it.

My Review:
I enjoyed reading this book. It was on the shorter end, about 140 pages, but there was a lot packed into it! This was another guilty pleasure, and a bonus, since yeah, it was so short, and easy to read, the pages just flew!

Like my previous guilty pleasure read, this won't be for everyone. I mean, some girls like a bad boy, but a mobster, that's a bit more then than that. There's also the fact that her dad's a dirty politician with some pretty horrible secrets, like he killed her mom, and oh, yeah, he's not her dad!

Her dad was pretty awful! I mean, it's the 21st century, ladies aren't ostracized for getting pregnant without being married anymore. Sure it's still difficult, but as a family man, well, how are families created? And there's more than one way to have a family!

Both of these characters do mess up. Like, he's set up and overreacts, because that was before he rescued her so it was moot now. She held a press conference without a bodyguard, which allowed her dad to get her again. It all worked out, there was just bumps on the read!

This book was great, and I can't wait to read the other book with it!