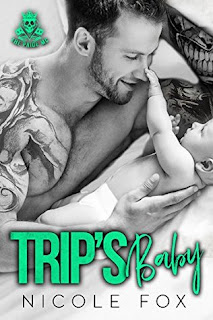 From Goodreads:
I THOUGHT SHE WAS DEAD. BUT NOW SHE'S BACK… WITH MY BABY IN HER ARMS.

I heard her scream as they gunned her down.
I promised I'd get my revenge for her death.
Years later, I'm almost ready to strike.
But then everything changed.

I'm a soldier, a warrior, a stone-cold killer.
It's the only way to survive in this world I’ve chosen…
Kill or be killed.

As VP of the Pride MC, my men depend on me to be ruthless.
I've got reason enough to stoke the fury that burns in my chest:
The murder of my girlfriend years ago.

My enemies took her from me.
They wanted to stop me in my tracks.
But all they did was throw gasoline on my fire.

For years, I've told myself to wait for the right time to make things right.
Death for death, blood for blood.

But then Misha shows up on my doorstep.

And she's not alone…
She's got my baby in her arms.

I'm reeling now, my world turned on its head.
I know only one thing for certain:
I'm about to show her what she's been missing all these years.

My Review:
This book was another great read! I found the world to be a little off, but other than that, this book had a lot of offer in terms of getting away from your own life for however long you were reading it! Which is really all a reader can ask from a book!

This world of bikers and motorcycle clubs, it can't be as all encompassing as it was in this book right? Like, Misha's dad said that if she chose this life, she was choosing it for her grandkids as well. Or how the law doesn't seem to matter at all, I mean, she was held hostage for 5 years. And how the ladies were thought of as! Not cool, dudes!

I really enjoyed Misha and Trip, they had a passionate relationship as teens, and now that they're parents together, they're a bit more discreet, but that flame is still there. They were a great couple, and totally didn't deserve what happened to them!

Misha had a few secrets about what happened, and why she was with the Jackals instead of dead. When it came out, it made sense what had happened, but it still caused some grief. Then there was Rigger, who should've changed his name to Trigger, who was just awful. Grow up, dude!

I enjoyed this book a lot, it was short and sweet with a really sweet ending!