Yeah, we have the cover of The Prophecy by Jennifer L. Armentrout, and it's so fantastic! 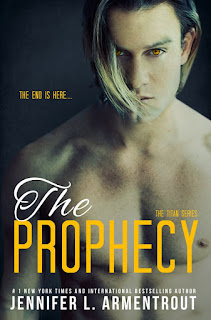 
Oh, yeah, this cover is pretty spectacular, I love that his eyes are yellow/gold! And the book sounds absolutely incredible! Can't wait to read this book! What about you guys? Happy reading!
Posted by Louisa @ Words I Write Crazy at 10:46 PM