Week 5 Review: The Grift of the Magi 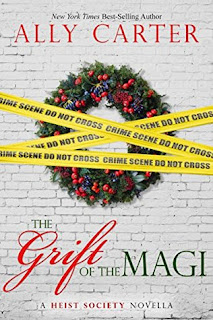 From Goodreads:
Katarina Bishop is a thief. To many it wouldn't matter that she now uses her considerable skills to re-steal valuable works of art and return them to their rightful homes.

So that's why Kat's surprised when an Interpol agent comes to her one snowy evening, asking for Kat's help.

The Magi Miracle Network was set to auction off a very rare, very valuable Faberge egg two days before Christmas, but the egg's been stolen and now the charity's reputation--and their future--is on the line.
Kat's family and Interpol might be opposite sides of most jobs, but someone just stole Christmas.

Now it's up to Kat and her crew to steal it back.

The Grift of the Magi is a Heist Society novella and is approximately half the length of the other novels in the series. It stands alone, but if you want read more about Kat and her crew check out Heist Society, Uncommon Criminals, and Perfect Scoundrels.

My Review:
This novella was just awesome! This series is chock full of awesome, so that was expected. But to have this novella while waiting hopefully for a 4th book in this series, yeah, it was great to have something to keep our hope alive!

Of course, there's a case of sorts that they need to investigate! That it's fairly personal, given that it's the charity that Hale's grandmother started, and it's a Faberge egg in a 3 part collection that one was a treasured possession of Kat's mom? Yeah, they both had a stake in it!

There was twist after twist! From her dad being the one to steal the egg the charity received, to looking for the original, yeah, that was just fantastic! There were so many unexpected twists, and I loved how they tricked the bad guy!

I loved that ending! It was so sweet, that she would do that for him, and then it became her Christmas present from him! And that final twist at the ending, yeah, so sweet! This was just a perfect Christmas time novella!

Loved reading this book, and I still hold a torch for a Heist Society #4!