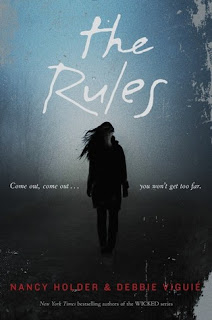 From Goodreads:
Narrated by alternating unreliable narrators, this dark thriller will have readers on the edge of their seats. No one is safe and everyone is a suspect. It's Saw meets I Know What You Did Last Summer.

Junior Robin Brisset has no idea what she's in for when she accepts an invitation to one of Callabrese High's most exclusive parties. And when the trademark scavenger hunt begins, Robin must go against every rule she's lived by to survive.

My Review:
Oh, this book was so great! I've been meaning to read it for a long while now, and I finally did, when I was in a bit of a slump, and this book helped me get out of it! So yeah, that was really fantastic! I've enjoyed other books by this duo, and I enjoyed this one as well!

The whole thing in the synopsis about unreliable narrators, that was very intriguing! Like, one of them could've, and was, the bad guy! So that was so great! And there were a lot of mini cliffhangers with all the different characters, so the pacing was excellent!

That August made this whole plan to get revenge on the people who contributed to his sister's death shows that he was smart and committed. But someone hijacked the event, though August was still a suspect, since he did have motive and all!

I almost want a sequel. Because I want to know who did what, and when. Because it said that Drew did most of the murders, and that Kyle only did a few, the only one we know for sure he did was Beth. Yeah.

This book was really awesome, and I really enjoyed reading it!