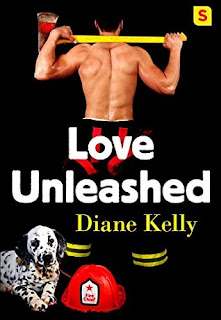 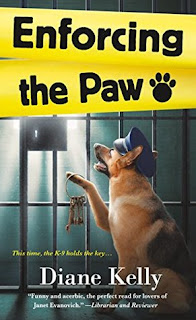 From Goodreads:
Bestselling author Diane Kelly brings the heat to her popular Paw Enforcement series when sparks fly between a teacher and a firefighter in Love Unleashed.

Between wrangling her rambunctious kindergarten class and trying to catch an elusive Dalmatian pup who's been hanging around the playground, teacher Jessica Bellingham can hardly seem to catch her breath. And when hot, hunky fireman Louie DeLuca arrives to teach the children about fire safety, she just might need mouth-to-mouth resuscitation. Who'd have thought a yellow slicker could be so sexy?


Things heat up quickly, igniting a passion the two would gladly allow to consume them. But will their romance become a four-alarm blaze, or will a dark secret from Jesse's past threaten to cool things off for good? And what will become of the playful puppy who seems to stay just out of reach?

From Goodreads:
When a case of he-said/she-said turns criminal, it's up to Megan Luz and her devoted K-9 to dig for the truth. . .

A TAIL OF TWO LOVERS
When relationships go south, some people just can't—or won't—let go. When Fort Worth Police Officer Megan Luz and her pawed partner Brigit investigate a series of stalking incidents involving a couple who recently broke up, their detective powers are put to the test. Is this a case of a controlling creep who refuses to accept rejection—or one about a woman scorned whose fury has been unleashed?

WHO END UP IN THE DOGHOUSE. . .
As hostilities escalate between the former lovers, the situation goes from romantically dysfunctional to downright dangerous. He insists his former flame has become a crazy ex-girlfriend intent on vengeance. She alleges that he is a master of manipulation and lays blame entirely at his feet. Who's the culprit and who's the victim? Can Megan and Brigit sniff out the truth. . .before somebody ends up dead?

My Review:
These books were just so freaking cute! I've really enjoyed this series, and yeah, now I'm all caught up, so I'm really happy about that! I enjoyed being in a different couple's heads, and then back to Megan, Brigit, and the bad guy's! So great to read!

Love Unleashed was adorable, a kindergarten teacher with a haunted past, and a fireman who made a bad decision that ultimately led him on the path he was on. I just loved it so much, though with Frankie helping out, it makes me think that it's set after Enforcing the Paw, because that's when she got the job, instead of just taking the training.

This case was very frustrating, for everybody, even us readers, because we don't know who is doing what! Being in "The Devoted One"'s head didn't give away who it was. The back and forth, the not charging anyone because they don't know who did it, but ultimately, justice won out! So great!

I loved reading these books, and I can't wait for more, because there has to be more, with Seth and opening up, and his grandfather!