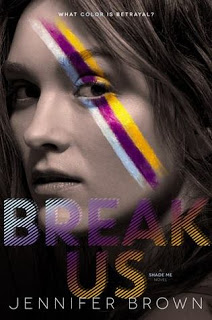 From Goodreads:
Nikki Kill doesn't see the world in black and white. Her synesthesia shades everything in view, transforming numbers, words, and emotions into colorful clues. Which means she's a dangerous commodity to anyone with something to hide.

Nikki has already taken on the Hollises—one of L.A.'s most powerful families—for murdering her half sister, Peyton. However, Nikki's next steps are clouded by the gray of uncertainty. Before she knows it, Nikki is on the trail of a cold case that couldn't be any more personal—the death of her mother.

But when the web of lies and secrets she uncovers leads back to the people who have tried to silence her, Nikki must pursue the sunbeam gold of justice, or everything—including her life—will be lost.

My Review:
Oh, this book was a fantastic ending to this series! Nikki had one final task-find Luna again, which snowballed into also investigating her mom's murder, as well as helping Chris with the case he was working on, the one that resulted in him being run over by a car in the previous book. Yeah. Lots going on!

So Chris does have memory loss, and so Nikki's left him alone for a while. But he's out and about now, so she kinda drags him back into the investigation, which is funny, given that she tried to avoid him in the first book!

We find out why her mom went back to working for the Hollies, and it really sucks, but also seems implausable that they could be blackmailed like that. C'mon, dude, it was an accident! But a big thing about this book, is about power, and who has it and how they're using it.

The blonde dude that was Luna's getaway driver in Dare You, he has a much bigger role in this book, and he kept popping up! And when we find out why, well, I'm glad that Nikki got to take him down! That was just excellent!

This book was a really great ending to the series, and I really enjoyed reading it!