Week 5 Reviews: Paw and Order, Upholding the Paw, Laying Down the Paw 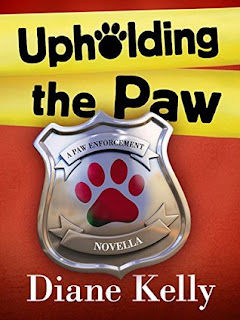 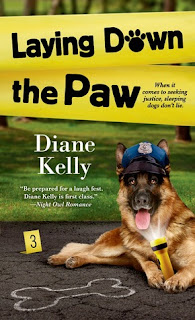 From Goodreads:
Police officer Megan Luz and her loyal K-9 partner Brigit are back on the beat—and under the gun—when the local rodeo show goes to the dogs…

OUT OF THE DOGHOUSE
After capturing the notorious Fort Worth "Tunabomber," Megan and Brigit are practically celebrities. Which is why the police chief lassoed them into doing rodeo duty —mostly as a public relations stunt for the department. Megan's not a fan of calf roping, bull riding, or goat milking contests. But when a thief appears to be working the circuit, her trusty K-9 partner starts sniffing for clues…

INTO THE FIRE HYDRANT

The culprit is "Robin Hood," a young Texas golddigger who steals from the rich to give to the poor—namely, herself. With Brigit hot on the trail, Megan has to juggle her on-again off-again reputation in the FWPD with her on-again off-again relationship with sexy bomb-squader Seth Rutledge. This time, Megan is determined to rope in her suspect and her man…before chaos, and/or her trusted furry partner, is unleashed.

From Goodreads:
It's just another typical day for Fort Worth Police Officer Megan Luz and her K-9 partner Brigit-until three unknown men set out on a city-wide crime spree. After setting a fire to distract law enforcement, the armed criminals hold up a bank and steal a city bus. And that's just for starters. Megan and Brigit put their noses to the ground and the chase is on. But hard as the K-9 team tries to put the clues together and track the men, the offenders stay a step ahead of them, racking up charges and victims. Will this K-9 team be able to stop the bad guys before their trail runs cold?

From Goodreads:
Police officer Megan Luz and her K-9 partner are back-with a vengeance.

IT'S A DOG-EAT-DOG WORLD.
When a raging tornado hits Forth Worth, Megan's squad car is flipped over-and her devoted police dog, Brigit, is not amused. But that's not all that's upside-down. The streets are littered with looters-and members of a violent street gang-and no local business is safe. It's time to get back on all fours and see that the job of protecting the public is done.

BUT WHO'S LEADER OF THE PACK?
But Megan, outmanned and outgunned, has no choice but to let the gang members get away. Later, when she learns that one of them is a suspect in an unsolved murder case, Megan is determined to see that justice is served. But will she end up in the doghouse? Her investigation has her and Brigit barking up the wrong tree at every turn. Meanwhile, a killer's on the loose....who will stop at nothing to get what he wants.

My Review:
Aw, these books were so great to read! These aren't fluff, cozy mysteries, they deal with some pretty serious crimes, but they have a measure of cuteness, just because of Brigit! And because of the way that they're written!

The bad guy in Paw and Order, man, she was so selfish! It took a combo of good police work, hard work, and a little bit of luck in order to catch her! And it was awesome for Megan to gain another mentor on her goal of becoming detective one day!

Upholding the Paw was a little more hilarious then the previous books. Because they kept getting away! One time after another, and it seemed like they were never going to be caught, because they kept on making random and lucky decisions! Loved it!

Laying Down the Paw is a bit different then the previous books. At first it seems the same with the 3 POV's, but as the book continues, it seems strange that this boy who never seemed to get a break (besides the one in the beginning that he gave up) was capable of such a horrible crime. I really enjoyed how that all worked out!

I loved reading these books and need to read more of Megan and Brigit's adventures!

Laying Down the Paw: