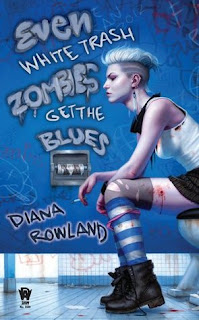 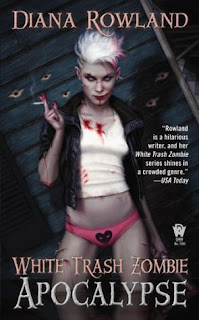 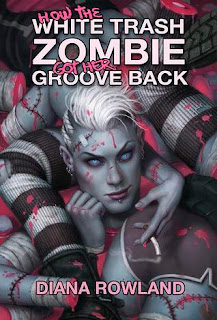 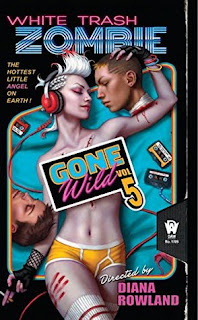 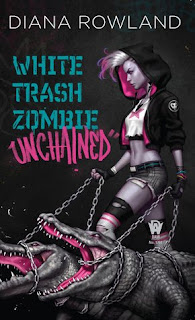 From Goodreads:
Angel Crawford is finally starting to get used to life as a brain-eating zombie, but her problems are far from over. Her felony record is coming back to haunt her, more zombie hunters are popping up, and she's beginning to wonder if her hunky cop-boyfriend is involved with the zombie mafia. Yeah, that's right—the zombie mafia.

Throw in a secret lab and a lot of conspiracy, and Angel's going to need all of her brainpower—and maybe a brain smoothie as well—in order to get through it without falling apart.

From Goodreads:
Our favorite white trash zombie, Angel Crawford, has enough problems of her own, what with dealing with her alcoholic, deadbeat dad, issues with her not-quite boyfriend, the zombie mafia, industrial espionage and evil corporations. Oh, and it's raining, and won't let up.

But things get even crazier when a zombie movie starts filming in town, and Angel begins to suspect that it's not just the plot of the movie that's rotten. Soon she's fighting her way through mud, blood, bullets and intrigue, even as zombies, both real and fake, prowl the streets.

Angel's been through more than her share of crap, but this time she's in way over her head. She'll need plenty of brainpower to fit all the pieces—and body parts—together in order to save herself, her town, and quite possibly the human race.

It's zombie versus zombie as the Saberton Corporation declares war against the Zombie Mafia, kidnapping several of their party. It falls to Angel to lead the remnants of her gang halfway across the country to claw their way through corporate intrigue, zombie drugs, and undead trafficking to rescue her friends—and expose the traitor responsible for their abduction...

From Goodreads:
Angel Crawford has buried her loser past and is cruising along in undead high gear—that is, until a murder-by-decapitation sends her on a hazardous detour. As Angel hunts for the killer, she uncovers a scheme that would expose zombies to the public and destroy the life she's built, and she's determined not to rest until she finds out who's behind it.

Soon she's neck-deep in lies, redneck intrigue, zombie hunters, and rot-sniffing cadaver dogs. It's up to her to unravel the truth and snuff out the conspiracy before the existence of zombies makes headline news and she's outed as a monster.

But Angel hasn't quite escaped the pill-popping ghosts of her past—not with an illicit zombie pharmaceutical at her fingertips. Good thing she's absolutely sure she can handle the drug's unpredictable side effects and still take down the bad guys…or maybe she's only one bad choice away from being dead meat—for real this time.

Angel knows a thing or two about kicking ass, but now the ass she needs to kick might be her own.

From Goodreads:
Angel Crawford has finally pulled herself together (literally!) after her disastrous dismemberment on Mardi Gras. She's putting the pieces of her life back in order and is ready to tackle whatever the future holds.

Too bad the future is a nasty bitch. There's a new kind of zombie in town: mindless shamblers, infectious and ravenous.

With the threat of a full-blown shambler pandemic looming, and a loved one stricken, Angel and the "real" zombies scramble to find a cure. Yet when Angel uncovers the true reason the plague is spreading so quickly, she adds "no-holds-barred revenge" to her to-do list.

Angel is busting her ass dealing with shambling hordes, zombie gators, government jerks, and way too many mosquitos, but this white trash chick ain't giving up.

Good thing, since the fate of the world is resting on her undead shoulders.

My Review:
Yeah, I loved reading these books! So much happens, like the Saberton Corporation, and learning more about zombies, and relationship ups and downs! Angel grows as a person, and accomplishes a lot! But she always fights dirty!

The attitude that a lot of the humans in the know had about zombies, that they were basically second class citizens, that was just awful! What they did to Kyle, oh, man, that was just pure torture, and just reinforces the fact that they're the bad guys!

Angel and Marcus's relationship has a lot of hurtles. Mainly, the same one over and over again, because he didn't learn. He made decisions without consulting her, and even though he tried to be better, in the end, he just made one too many in the whole "I got into college and we're moving to New Orleans" even though she didn't know he was applying for schools. Just, no. I'm glad that they parted romantic ways amicably!

That this is the majority of the series, well, we met a lot more characters! Like, Heather who was Julia but became Naomi. Dr Nikas, who was just adorable, and Pietro. We also learn more about the world, how the parasite that isn't a parasite works, and about mature zombies. So fascinating to read!

Honestly, Gone Wild was hard for me to read. Going in, knowing that she was falling back into her addictions but with mods? It's hard to sit back and be unable to do anything while people you like make bad choices! It's not like she dealt with her human addictions, she just couldn't have them anymore, they didn't have the affect that they usually had, and she didn't have a craving for them. But she has to deal with it now, in this book, and it was hard to watch her go on a downward spiral, after all the work she's put in, like getting her GED. Yeah. But there were a lot of discoveries, too, like Nick and Allen. There was just a ton going on!

Unchained, starts in a good place, she's healed and ready to get back into things. Then it turns out the events of the last book are having some pretty severe consequences, in the shamblers, and zombie alligators. So there were 3 parts Angel beating herself up, 2 parts running around trying to find a cure, and 1 part everything else! Like, Nick, the FBI, and college. There was so much going on, and it was so great to read!

We finally finish her story arc with her arch-nemesis, Dr. Charish! After everything that Charish did in the past 5 books, from having her father kidnapped so to trade him with Angel, to the lengths that she went to become immortal and wipe out zombies, well, she got what was coming to her, and I think it's poetic justice that not only is her research helping zombies, but that a zombie took over her life!

I'm really satisfied with the ending of Unchained. The loose threads are basically tied up, everybody is happy, there's more progress with the heads from the first book. And Angel and Nick are together! Yeah! So if there's more books, yeah, more time with these characters! If not, yeah, the series had a good ending!

Loved these books so much, and yeah, happy whether this is the end of the series or if we get more books!

Even White Trash Zombies Get the Blues:

How the White Trash Zombie Got Her Groove Back: