Week 50 Review: As Time Goes By 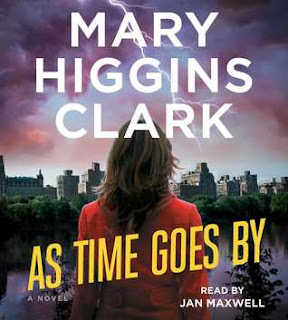 From Goodreads:
In this exciting thriller from Mary Higgins Clark, the #1 New York Times bestselling "Queen of Suspense," a news reporter tries to find her birth mother just as she is assigned to cover the high-profile trial of a woman accused of murdering her wealthy husband.

Television journalist Delaney Wright is on the brink of stardom after she begins covering a sensational murder trial for the six p.m. news. She should be thrilled, yet her growing desire to locate her birth mother consumes her thoughts. When Delaney's friends Alvirah Meehan and her husband Willy offer to look into the mystery surrounding her birth, they uncover a shocking secret they do not want to reveal.

On trial for murder is Betsy Grant, widow of a wealthy doctor who has been an Alzheimer's victim for eight years. When her once-upon-a-time celebrity lawyer urges her to accept a plea bargain, Betsy refuses: she will go to trial to prove her innocence.

Betsy's stepson, Alan Grant, bides his time nervously as the trial begins. His substantial inheritance hangs in the balance—his only means of making good on payments he owes his ex-wife, his children, and increasingly angry creditors.

As the trial unfolds, and the damning evidence against Betsy piles up, Delaney is convinced that Betsy is not guilty and frantically tries to prove her innocence. A true classic from Mary Higgins Clark, As Time Goes By is a thrilling story by a master of the genre.

My Review:
I really enjoyed reading this book! Well, technically listening to it, but you know what I mean. I enjoyed all the different characters, and how all the different threads came together. I loved both the trial and Alvirah and Willy investigating!

While I haven't read the other books in the series, I don't think I really need to, because it seems like Alvirah and Willy are side characters with important parts to play, who investigate various mysteries but that the books star whomever the mystery circles around.

So there were two main mysteries in this book. Who killed Dr. Grant, and who was Delaney's birth mother. The former, yeah, that was pretty interesting mystery. But the later, that was the backbone of the book for me, and I did guess it, I'm not sure if it was a mystery to us readers, because why otherwise would these both be in the same book? But it was waiting for the big reveal, for the characters to learn that Betsy was Delaney's mom, yeah, I was really anticipating that!

I really enjoyed this book, it was fantastic to listen to and I wouldn't mind reading other books in the series (which sounds lackluster, but I have so many other books to read, and I don't have to read the other books in this series!)

Author: Mary Higgins Clark
Series: Alvirah and Willy #10
Read: December 12th, 2018
Source: Library
Reason Why: Sounded good, and my library is having a bingo contest, and listening to an audiobook is one of the items. And it's a Prequel & Sequel Challenge 2018 Book!
Publisher: Simon Schuster Audio
Published: April 5th 2016