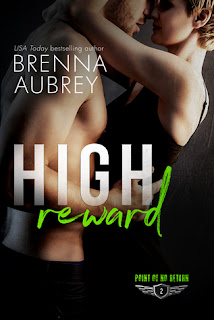 From Goodreads:
He was looking for redemption. Instead, he found her.

After a rocky start, former Navy SEAL-turned-astronaut Ryan "Ty" Tyler and nerdy flight psychologist Gray Barrett discovered they worked well together. Ty managed to tame his playboy reputation, and cautious Gray got her first taste of adventure. They had a good thing going. Until a good thing turned into a smoking hot thing... and that turned into a falling-in-love thing.

Now Ty's facing an impossible choice. Shake the demons of his past, or give up a future with the only woman he could ever love.

My Review:
Oh, yeah, this book was really fantastic! After the evil ending of High Risk, I just had to know what was going to happen next! And we get to read about their first meeting, which was great for us, but not so great for Gray, because Ty was an ass!

Of course, it's a book, there has to be conflict, so while Ty at the end of High Risk had decided to stay with Gray, well, he changes his mind. Which isn't fun for the characters, but was just so great for us readers to enjoy!

A lot of this book is about Ty's issues, of the promise he made and how he shouldn't keep it, as well as his fear of the dark. Both of them are taking his life in a more negative path, and while he's cleaned up his act regarding alcohol and such, he still has a journey to go on to get into a good headspace.

Her dad had his heart in the right place, but trying to control the life of his adult daughter just took it too far. While we don't see their reconciliation, we're told of it, and yeah, I'm hoping he made up for his mistakes!

I really enjoyed this book, and I can't wait to see what the future has in store, because I think there's two other couples, potentially!