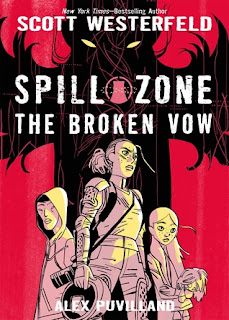 From Goodreads:
Only the very brave or the very desperate dare enter the Spill Zone—Addison Merritt is a little of both. In exchange for a suitcase full of cash, she made one last to the Zone. She survived the encounter, but came back changed.

Addison is not alone. In a remote village in North Korea, a young man named Jae was touched by the unholy fire of the Spill Zone. He made it out alive—alive, but also changed.

Now bestowed with uncanny powers, Addison and Jae may be the only ones strong enough to face a new threat that has risen in the Spill Zone. This deadly entity is searching for his runaway bride—and his hunt is bringing him closer and closer to Addison and her little sister.

My Review:
Yeah, this book was so fantastic to read! We got to learn so much more, like Jae and the other spill zone. And yeah, it's kinda an important detail! We learned more about Vespertine and the world she escaped from, and why this all happened. Yeah. A lot went on!

Honestly, there was a lot of back and forth with this book. Well, kinda. Yeah, Vespertine should've been angry with the dude for killing her parents, but then it turns out that he had a good reason. And they could've had a good ending, but that would've meant Lexa leaving behind Addison. Not happening!

That ending! Wow, it seemed pretty nice and relaxed (and it was so weird to see Lexa as a teenager!) and then it was cool and epic, and then there was the last few pages, and then we find out who she was texting. That was an awesome ending! Though I still would love more, like an explanation of what happened and it worked given the collapse of the spill zone!

I do wish that we could've learned more about this world, about why Vespertine's parents did what they did, the rules, what Vespertine looked like and more, because it seems so interesting, and like we only got the tip of the iceberg, and there's so much more to explore. And I want to explore it!

Loved reading this book, and I wouldn't mind another sequel!