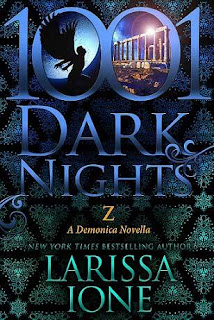 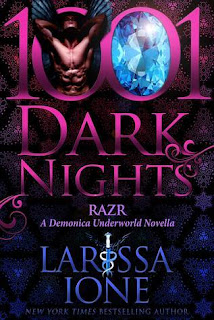 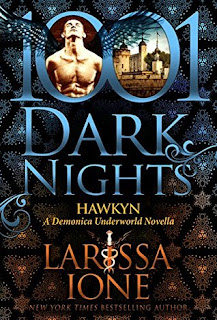 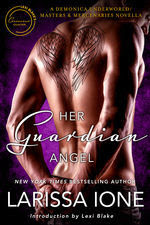 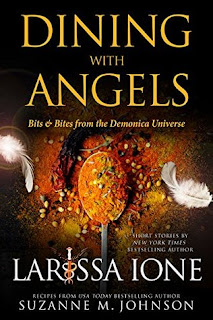 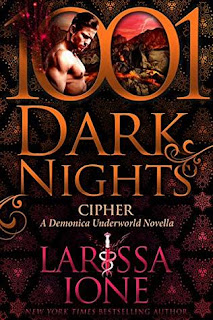 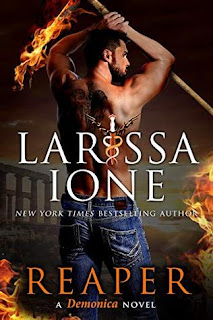 From Goodreads:
Zhubaal, fallen angel assistant to the Grim Reaper, has spent decades searching for the angel he loved and lost nearly a century ago. Not even her death can keep him from trying to find her, not when he knows she’s been given a second chance at life in a new body. But as time passes, he's losing hope, and he wonders how much longer he can hold to the oath he swore to her so long ago…

As an emim, the wingless offspring of two fallen angels, Vex has always felt like a second-class citizen. But if she manages to secure a deal with the Grim Reaper — by any means necessary — she will have earned her place in the world. The only obstacle in the way of her plan is a sexy hardass called Z, who seems determined to thwart her at every turn. Soon it becomes clear that they have a powerful connection rooted in the past…but can any vow stand the test of time?

From Goodreads:
A fallen angel with a secret.

An otherworldly elf with an insatiable hunger she doesn't understand.

Meet mortal enemies Razr and Jedda...and the priceless diamond that threatens to destroy them both even as it bonds them together with sizzling passion.

Welcome back to the Demonica Underworld, where enemies find love...if they're strong enough to survive.

From Goodreads:
As a special class of earthbound guardian angel called Memitim, Hawkyn is charged with protecting those whose lives are woven into the fabric of the future. His success is legendary, so when he's given a serial killer to watch over, he sees no reason for that to change. But Hawkyn's own future is jeopardized after he breaks the rules and rescues a beautiful woman from the killer's clutches, setting off an explosive, demonic game of cat and mouse that pits brother against brother and that won't end until someone dies.


Aurora Mercer is the half-wytch lone survivor of a psychopath who gets off on the sadistic torture of his victims. A psychopath whose obsessive psyche won't let him move on until he kills her. Now she's marked for death, her fate tied to that of a murderer…and to a sexy angel who makes her blood burn with desire…

From Goodreads:
After a difficult childhood and a turbulent stint in the military, Declan Burke finally got his act together. Now he's a battle-hardened professional bodyguard who takes his job at McKay-Taggart seriously and his playtime – and his playmates – just as seriously. One thing he never does, however, is mix business with pleasure. But when the mysterious, gorgeous Suzanne D'Angelo needs his protection from a stalker, his desire for her burns out of control, tempting him to break all the rules…even as he's drawn into a dark, dangerous world he didn’t know existed.

Suzanne is an earthbound angel on her critical first mission: protecting Declan from an emerging supernatural threat at all costs. To keep him close, she hires him as her bodyguard. It doesn't take long for her to realize that she's in over her head, defenseless against this devastatingly sexy human who makes her crave his forbidden touch.


Together they'll have to draw on every ounce of their collective training to resist each other as the enemy closes in, but soon it becomes apparent that nothing could have prepared them for the menace to their lives…or their hearts.

From Goodreads:
In a world where humans and supernatural beings coexist — not always peacefully — three things can bring everyone to the table: Love, a mutual enemy, and, of course, food.

And who doesn't love a party? (Harvester rolls her eyes and raises her hand, but we know she's lying.)

Join Ares and Cara as they celebrate a new addition to their family. See what Reaver and Harvester are doing to "spice" things up. Find out what trouble Reseph might have gotten himself into with Jillian. You’ll love reading about the further adventures of Wraith and Serena, Declan and Suzanne, and Shade and Runa, and you're not going to want to miss the sit down with Eidolon and Tayla.

So pour a glass of the Grim Reaper's finest wine and settle in for slices of life from your favorite characters and the recipes that bring them together. Whether you're dining with angels, drinking with demons, or hanging with humans, you'll find the perfect heavenly bits and sinful bites to suit the occasion.

It's been seven months since Cipher, an Unfallen angel who straddled a razor thin line between good and evil, woke up in hell with a new set of wings, a wicked pair of fangs, and a handler who's as beautiful as she is dangerous. As a laid-back cyber-specialist who once assisted guardian angels, he'd been in a prime position to earn back his halo. But now, as a True Fallen forced to use his talents for malevolence, he must fight not only his captors and his sexy handler, but the growing corruption inside him…before the friends searching for him become his enemies and he becomes his own worst nightmare.

Lyre is a fallen angel with a heart full of hate. When she's assigned to ensure that Cipher carries out their boss's orders, she sees an opportunity to take revenge on those who wronged her. All she has to do is appeal to Cipher's burgeoning dark side. But the devastatingly handsome fellow True Fallen has other ideas — sexy ideas that threaten to derail all Lyre's plans and put them in the path of an approaching hell storm.


Danger and desire explode, even as Cipher and Lyre unravel a sinister plot that will fracture the underworld and send shockwaves into Heaven itself…

From Goodreads:
THE DEMONICA SERIES RETURNS...

He is the Keeper of Souls. Judge, jury, and executioner. He is death personified.

He is the Grim Reaper.

A fallen angel who commands the respect of both Heaven and Hell, Azagoth has presided over his own underworld realm for thousands of years. As the overlord of evil souls, he maintains balance crucial to the existence of life on Earth and beyond. But as all the realms gear up for the prophesied End of Days, the ties that bind him to Sheoul-gra have begun to chafe.

Now, with his beloved mate and unborn child the target of an ancient enemy, Azagoth will stop at nothing to save them, even if it means breaking blood oaths and shattering age-old alliances.

My Review:
Wow, I just loved reading these so much! They were just so freaking great, we learned more about Demonica Underworld, and this world in general was explored more, from gem elves to Wytchs, yeah, some really interesting things happened! Oh, not to mention the big changes because of Reaper!

We had number of couples in these books, from those that work for Azagoth and Sheoul-gra, and Azagoth's kids. They all had different struggles, and I really enjoyed how they solved their various problems, and found happy endings!

Her Guardian Angel, I wasn't sure how this crossover would work, people know about demons, we knew that from Rogue Rider. How could that crossover with a normal world? Well, that question is answered, and it makes sense!

Azagoth had the first Demonica Underworld book. Well, he got another one in Reaper-and a much bigger story. And one that has much higher stakes. Yeah, this book was pretty dramatic and intense and I couldn't put it down! I started around midnight, and finished around 3 am. And I can totally see why this book affects the world that the next generation is going to inhabit!

Loved this series so much, and I can't wait for the next generation's stories to start!