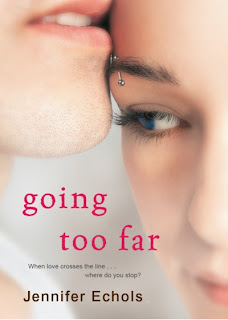 From Goodreads:
HOW FAR WOULD YOU GO?

All Meg has ever wanted is to get away. Away from high school. Away from her backwater town. Away from her parents who seem determined to keep her imprisoned in their dead-end lives. But one crazy evening involving a dare and forbidden railroad tracks, she goes way too far...and almost doesn't make it back.

John made a choice to stay. To enforce the rules. To serve and protect. He has nothing but contempt for what he sees as childish rebellion, and he wants to teach Meg a lesson she won't soon forget. But Meg pushes him to the limit by questioning everything he learned at the police academy. And when he pushes back, demanding to know why she won't be tied down, they will drive each other to the edge -- and over....


My Review:
I really enjoyed this book, it was thoughtful, emotionally, and a hell of a ride! I loved the characters, and their back stories, they were real, and they came alive for me!

The bantering between John and Meg, it was fun, and it was something that some teens really need to think about, because some differences, well, they aren't so different, everybody feels that way one time or another. And if they don't, they're not normal, and they haven't really lived.

It was just a great book that I really enjoyed, you guys should really check it out!