Week 20 Review: The Wrath and the Dawn 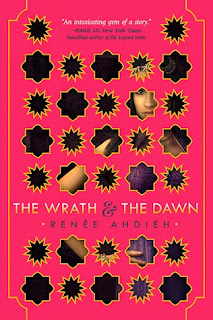 From Goodreads:
A sumptuous and epically told love story inspired by A Thousand and One Nights

Every dawn brings horror to a different family in a land ruled by a killer. Khalid, the eighteen-year-old Caliph of Khorasan, takes a new bride each night only to have her executed at sunrise. So it is a suspicious surprise when sixteen-year-old Shahrzad volunteers to marry Khalid. But she does so with a clever plan to stay alive and exact revenge on the Caliph for the murder of her best friend and countless other girls. Shazi's wit and will, indeed, get her through to the dawn that no others have seen, but with a catch . . . she's falling in love with the very boy who killed her dearest friend.

She discovers that the murderous boy-king is not all that he seems and neither are the deaths of so many girls. Shazi is determined to uncover the reason for the murders and to break the cycle once and for all.

My Review:
I loved reading this book, so, so, so much! I knew I'd enjoy it from reading an excerpt, and did! I might have lost a bit of faith near the beginning with the multiple POV's, but I gained that back, and then some by the end of the book!

This book was just utterly captivating! So well written, entertaining, always with something going on, even if it was something small, it came to mean something. And that was just so excellent! Between her, Khalid, her dad, and her first love, there was a lot going on!

These characters! We knew about the curse, kinda, from the prologue, but not the circumstances that led to it. So Shazi was angry, but she was also herself, strong-willed, and just so fantastic! And Khalid, being broken by all of this, weighed down with guilt. Just because one dad wanted more people to feel his pain.

Oh, that ending! That hurt, because we know her dad is doing it, but it might've as we'll as been the curse for all the damage it caused. and now this those two delegates, the threat of his by his dad's marriage uncle, and the dark oath that her dad is walking on, well, man, I need the sequel!

This was such a fantastic book, compelling and just so readable, and I'm so glad that we get more!