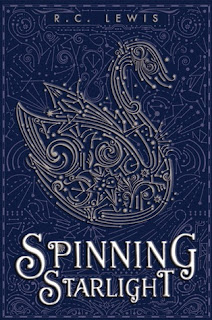 From Goodreads:
Sixteen-year-old heiress and paparazzi darling Liddi Jantzen hates the spotlight. But as the only daughter in the most powerful tech family in the galaxy, it's hard to escape it. So when a group of men show up at her house uninvited, she assumes it's just the usual media-grubs. That is, until shots are fired.

Liddi escapes, only to be pulled into an interplanetary conspiracy more complex than she ever could have imagined. Her older brothers have been caught as well, trapped in the conduits between the planets. And when their captor implants a device in Liddi's vocal cords to monitor her speech, their lives are in her hands: One word and her brothers are dead.

Desperate to save her family from a desolate future, Liddi travels to another world, where she meets the one person who might have the skills to help her bring her eight brothers home-a handsome dignitary named Tiav. But without her voice, Liddi must use every bit of her strength and wit to convince Tiav that her mission is true. With the tenuous balance of the planets deeply intertwined with her brothers' survival, just how much is Liddi willing to sacrifice to bring them back?

Haunting and mesmerizing, this retelling of Hans Christian Andersen's The Wild Swans strings the heart of the classic with a stunning, imaginative world as a star-crossed family fights for survival in this companion to Stitching Snow.

My Review:
The first thing I want to say, is that while this book has similarities to Stitching Snow-same author, similar covers, retellings set in a futuristic sci fi/fantasy world, and transportation is a plot point, or more in this book, they aren't companion books. They are both stand alones. So now that you know that, on to everything else!

This book was really fantastic! From the characters, to the world, to the plot, everything about this book was fantastic! I loved her inner thoughts, especially her proposed news articles titles to her actions or what was happening to her. So funny!

I must say, that the idea of a society that can't read because they have technology to make it obsolete almost perfectly reasonable, and scary. It's something that I love to do, and that they decided that it wasn't needed for communication...scary, but also sad.

Then again, the writing system of Tiav's world, was so strange and complicated! Like, it started off like ours, but then there were primary and secondary stages, so "T" was primary, then "i" was secondary, then "a" then "v" I think, but maybe not, because when he was doing that, he was enunciating the syllables. Confusing and complicated!

The ending was a bit confusing-I didn't know that they were at that point, I thought they still had a few more to go, and then things were happening, and it was over, and it was bittersweet, but so good to read! But yeah, just a little bit confusing for me, misreading something there!