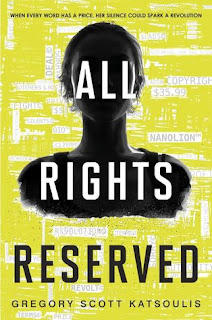 From Goodreads:
In a world where every word and gesture is copyrighted, patented or trademarked, one girl elects to remain silent rather than pay to speak, and her defiant and unexpected silence threatens to unravel the very fabric of society.

Speth Jime is anxious to deliver her Last Day speech and celebrate her transition into adulthood. The moment she turns fifteen, Speth must pay for every word she speaks ("Sorry" is a flat ten dollars and a legal admission of guilt), for every nod ($0.99/sec), for every scream ($0.99/sec) and even every gesture of affection. She's been raised to know the consequences of falling into debt, and can't begin to imagine the pain of having her eyes shocked for speaking words that she's unable to afford.

But when Speth's friend Beecher commits suicide rather than work off his family's crippling debt, she can't express her shock and dismay without breaking her Last Day contract and sending her family into Collection. Backed into a corner, Speth finds a loophole: rather than read her speech — rather than say anything at all — she closes her mouth and vows never to speak again. Speth's unexpected defiance of tradition sparks a media frenzy, inspiring others to follow in her footsteps, and threatens to destroy her, her family and the entire city around them.

My Review:
Oh, wow, this book was really fantastic! I was expecting it to make me enraged, and yeah, there were moments. To have music rights, and then to charge people for what their grandparents did, yeah, that's just horrible. Especially since the price of that is extreme labour. And used as a way to control the population! Just awful!

Speth didn't go into this planning on not speaking. She was going to do things like they were always done. But then her friend kills himself, and she couldn't speak. Then she wasn't allowed to. Which starts a movement. But things are still difficult for her family!

I really enjoyed watching Speth go on her journey, all without having to speak. Like, when she's attacked, she can't call for help. Then she's drawn into this hidden world, and I really enjoyed her adventures and the people she was with! It was so entertaining!

That ending was just so fantastic! It was just epic, and then Speth could speak! And because of the way the world is, it's not like it's going to get out, and yeah, that was justice, using the awfulness against the bad guys!

Loved this book, can't wait for the next one, and I wonder if Speth is going to narrate it as well!