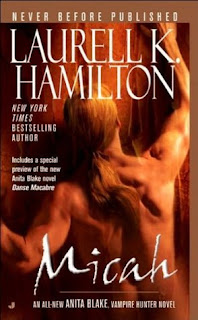 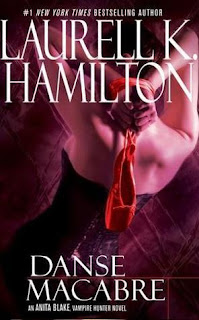 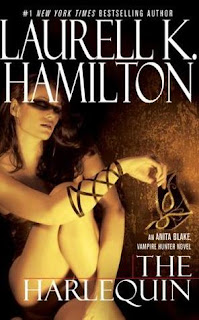 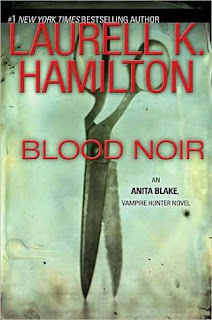 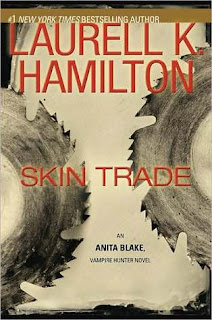 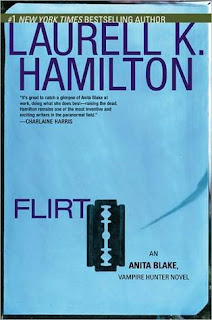 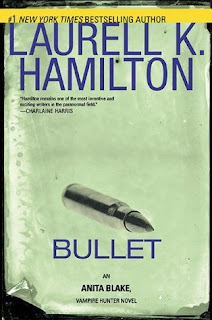 From Goodreads:
RAISING THE DEAD IS EASY. LOVE IS HARD... There are lots of reasons to raise the dead-some private, some public. In this case, the feds have a witness who died before he could speak on the record. They want him raised so his testimony can be taken. So here I am, on a plane to Philadelphia, flying off to do my job. But I'm not alone. Micah is with me. Micah, head of the St. Louis wereleopard pard. King to my Queen. The only one of my lovers who can stir my blood with just a glance from his chartreuse cat's eyes. I was happy to have him at my side. Until he mentioned that this will be our first time alone together. No Master Vampire. No Alpha Werewolf. Just me and Micah. And all my fears and doubts...

From Goodreads:
These days, Anita Blake is less interested in vampire politics than in an ancient, ordinary dread she shares with women down the ages: she may be pregnant. And, if she is, whether the father is a vampire, werewolf, or something else entirely, it's clear that being a Federal Marshal known for raising the dead and being a vampire executioner is no way to bring up a baby.

From Goodreads:
Anita Blake is about to face the challenge of her life. Into her world-a world already overflowing with power-have come creatures so feared that powerful, centuries-old vampires refuse to mention their names. It is forbidden to speak of The Harlequin unless you've been contacted. And to be contacted by The Harlequin is to be under sentence of death. Long-time rivals for Anita's affections, Jean-Claude, Master Vampire of the City, and Richard, alpha-werewolf, will need to become allies. Shapeshifters Nathaniel and Micah will have to step up their support. And then there's Edward. In this situation, Anita knows that she needs to call the one man who has always been there for her...

From Goodreads:
A favor for Jason, vampire hunter Anita Blake's werewolf lover, puts her in the center of a fullblown scandal that threatens master-vampire Jean- Claude's reign-and makes her a pawn in an ancient vampire queen's new rise to power

From Goodreads:
When a vampire serial killer sends Anita Blake a grisly souvenir from Las Vegas, she has to warn Sin City;s local authorities what theyre dealing with. Only its worse than she thought. Ten officers and one executioner have been slain-paranormal style. Anita heads to Vegas, wheres shes joined by three other federal marshals, including the ruthless Edward. Its a good thing he always has her back, because when she gets close to the bodies, Anita senses tiger too strongly to ignore it. The weretigers are very powerful in Las Vegas, which means the odds of her rubbing someone important the wrong way just got a lot higher.

From Goodreads:
When Anita Blake meets with prospective client Tony Bennington, who is desperate to have her reanimate his recently deceased wife, she is full of sympathy for his loss. Anita knows something about love, and she knows everything there is to know about loss. But what she also knows, though Tony Bennington seems unwilling to be convinced, is that the thing she can do as a necromancer isn't the miracle he thinks he needs. The creature that Anita could coerce to step out of the late Mrs. Bennington's grave would not be the lovely Mrs. Bennington. Not really. And not for long.

From Goodreads:
Anita Blake is back in St. Louis and trying to live a normal life-as normal as possible for someone who is a legal vampire executioner and a U. S. Marshal. There are lovers, friends and their children, school programs to attend. In the midst of all the ordinary happiness a vampire from Anita's past reaches out. She was supposed to be dead, killed in an explosion, but the Mother of All Darkness is the first vampire, their dark creator. It's hard to kill a god. This dark goddess has reached out to her here-in St. Louis, home of everyone Anita loves most. The Mother of All Darkness has decided she has to act now or never, to control Anita, and all the vampires in America.

The Mother of All Darkness believes that the triumvirate created by master vampire Jean-Claude with Anita and the werewolf Richard Zeeman has enough power for her to regain a body and to immigrate to the New World. But the body she wants to possess is already taken. Anita is about to learn a whole new meaning to sharing her body, one that has nothing to do with the bedroom. And if the Mother of All Darkness can't succeed in taking over Anita's body for herself, she means to see that no one else has the use of it, ever again. Even Belle Morte, not always a friend to Anita, has sent word: "Run if you can..."

My Review:
I made a decision to read a big chunk of this series. I mean, from the reviews that I've read, around Skin Trade was when Anita finally really understood her issues and her limitations, and knows how to work with them. Sure, there'll be screw ups, but the hard part is behind her!

I really enjoyed the novellas, almost, though they're full novels of the series, of Micah and Flirt, because they were an easy read, but gave us a look at what was happening in their lives, and I really enjoyed getting to know the characters just a little bit more!

The threat that they face from the Mother of All Darkness, is a little bit scary. Having your body taken over, and that what makes you you is gone, yeah, that's not cool. I really enjoyed watching them face her down, and win! That was great!

One of the things that she brings up, is, being a marshal and having that power and misusing it. But the example she gave of misuse of deputizing people, she did in The Harlequin, I believe. The series kinda got mixed up in my head.