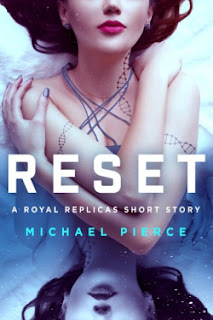 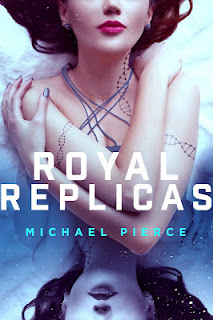 From Goodreads:
As the surrogate daughter of the Duke and Duchess of the 24th Ward, seventeen-year-old Victoria Sandalwood should look forward to days filled with the luxury of high society. Instead, she must settle for a cellar closet and is subjected to the abuse of the Duke—Master Ramsay.

Victoria's life is about to change with the chance meeting of the gorgeous and charismatic Kale. Besides the fact that she's kept under lock and key in the Ramsey estate, he is also dating the Ramsey's eldest daughter. But that doesn't stop him from perusing Victoria and trying to save her from her meager existence. Will she remain subordinate to her master or take a chance on love and the possibility of a fulfilling life outside the Ramsey estate?

Reset is the companion short story to the novel Royal Replicas and exclusively available to newsletter subscribers. Witness the events leading up to Victoria's heartbreaking "reset."

From Goodreads:
"Princess Amelia is dead... and one of you will replace her."

Seventeen-year-old Victoria Sandalwood has served the Duke and Duchess all her life. Over the years, she's learned to make due with what she has and endure her surrogate father's awful punishments. She dreams of escape, but never expected it to come in the form of a message from the Queen of Westeria.

Victoria learns that she's the Queen's daughter, the younger sister to Princess Amelia, and it's time to come home and claim her birthright. When she arrives, she discovers she's not the only one who received the royal message.

Victoria must compete with six other girls to earn the affection of both the Queen and a princely suitor… and to replace the secretly deceased Princess Amelia. If she fails to win the crown, Victoria may just have to fight for her life…

Royal Replicas is the first book in a YA dystopian series. If you enjoy courtly intrigue, heart-pounding adventure, and sweet romance, then you'll love this captivating story. Perfect for fans of Kiera Cass, Bella Forrest, and Veronica Roth.

My Review:
Oh, it was so great to read these stories! Reset was pretty chilling, and yet so amazing! And then there was Royal Replicas, which took her out of that life, and into an even more dangerous one! So fantastic!

Victoria has had it bad. She's been raised as the servant of the Duke's family, and the Duke himself was really abusive, both to her, and to his two daughters. It was really distressing to read, because there was nothing anybody could really do to stop him! So glad that Victoria got out, but his daughters didn't!

The comparisons to other books made in the synopsis are really spot on, with a bunch of girls competing for a spot of royalty. Different way through, but similar idea! And it played out so well in this book, it was really awesome to read!

And that ending! Oh! That was particularly evil, and I thoroughly enjoyed it! That they don't remember that help is coming, that they don't really seem to recall that they need help...Yeah. Not good! But there's a sequel, so there has to be something happening there!

Yeah, I enjoyed these so, so much, and the sequel can't come fast enough!