Week 36 Review: Even the Darkest Stars 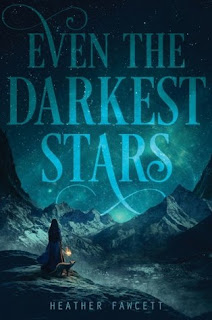 From Goodreads:
Kamzin has always dreamed of becoming one of the Emperor's royal explorers, the elite climbers tasked with mapping the wintry, mountainous Empire and spying on its enemies. She knows she could be the best in the world, if only someone would give her a chance.

But everything changes when the mysterious and eccentric River Shara, the greatest explorer ever known, arrives in her village and demands to hire Kamzin—not her older sister Lusha, as everyone had expected—for his next expedition. This is Kamzin's chance to prove herself—even though River's mission to retrieve a rare talisman for the emperor means climbing Raksha, the tallest and deadliest mountain in the Aryas. Then Lusha sets off on her own mission to Raksha with a rival explorer who is determined to best River, and Kamzin must decide what's most important to her: protecting her sister from the countless perils of the climb or beating her to the summit.

The challenges of climbing Raksha are unlike anything Kamzin expected—or prepared for—with avalanches, ice chasms, ghosts, and even worse at every turn. And as dark secrets are revealed, Kamzin must unravel the truth of their mission and of her companions—while surviving the deadliest climb she has ever faced.

My Review:
Reading this book was just fantastic! The world was very interesting, and I just loved learning more about this. And since this is a duology (I believe) that means that we get more, but we won't be overwhelmed, you know?

Immediately, you're thrown into this world, which I loved. There were dragons and shamans, and reading the signs from the skies, and it was all just fascinating. There's the witch forest right next to their village, and a fire demon that Kamzin isn't supposed to befriend. I just loved it!

Kamzin wants to be the one that wants to help guide the expedition up the mountain. It's dangerous, and yet her sister is the one that was supposed to do it. But events happen and Kamzin is the one who goes with River Shara. Of course, it's not quite as simple as that, because it was never simple1

This book was mostly a heart-pounding ride. The start was gradual, but one things going, there were very few moments that slowed down a bit. And that worked, especially with that ending, which wow, that was just totally unexpected but not, because it was hinted at.

Such a great book and after that cliffhanger ending, I need the next book!