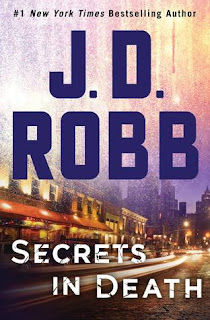 From Goodreads:
A new novel in the #1 New York Times bestselling series: Lt. Eve Dallas must separate rumors from reality when a woman who traffics in other people's secrets is silenced.

The chic Manhattan nightspot Du Vin is not the kind of place Eve Dallas would usually patronize, and it's not the kind of bar where a lot of blood gets spilled. But that's exactly what happens one cold February evening.

The mortally wounded woman is Larinda Mars, a self-described "social information reporter," or as most people would call it, a professional gossip. As it turns out, she was keeping the most shocking stories quiet, for profitable use in her side business as a blackmailer. Setting her sights on rich, prominent marks, she'd find out what they most wanted to keep hidden and then bleed them dry. Now someone's done the same to her, literally—with a knife to the brachial artery.

Eve didn't like Larinda Mars. But she likes murder even less. To find justice for this victim, she'll have to plunge into the dirty little secrets of all the people Larinda Mars victimized herself. But along the way, she may be exposed to some information she really didn't want to know…

My Review:
Yeah, another book in this series! I mean, this is book 45 in the series, so it's pretty long lived and so enjoyed and enjoyable! These characters are so enjoyable to be with these characters! I do wonder how it's going to end, but that's at the back of mind, while I'm enjoying each particular book!

This time, there was only one death, for more of the book. And there might not have been another, but for the bad guy, well, being the bad guy. So not that it was a laid back investigation, but it wasn't as intense, you know? So that was really great to read! And plus, this book took place over the course of 2 days, Tuesday night to Thursday.

Eve, of course, has her things, like eavesdropping and how that doesn't make sense. But there were also their personal issues, what with their dads. And how Roarke finds out/figures out that Summerset killed his dad, which is not a spoiler, because we found out a long time ago, when Summerset broke his leg, Eve found out. But this was when Roarke found out, and a bit more of the situation.

The one clue that really figured out who the bad guy was very small, and we knew what it was, but I didn't catch the significance of it until after they said who the bad guy was. And yeah, this bad guy, he was more average, but creepy, and obsessive, and selfish. Glad he got caught!

Such a great book, and I can't wait for Dark in Death early next year!