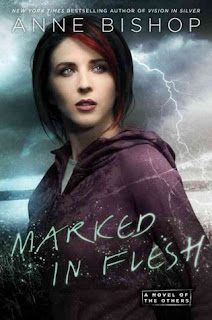 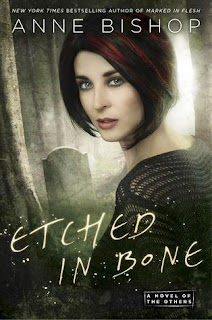 From Goodreads:
For centuries, the Others and humans have lived side by side in uneasy peace. But when humankind oversteps its bounds, the Others will have to decide how much humanity they’re willing to tolerate—both within themselves and within their community...

Since the Others allied themselves with the cassandra sangue, the fragile yet powerful human blood prophets who were being exploited by their own kind, the delicate dynamic between humans and Others changed. Some, like Simon Wolfgard, wolf shifter and leader of the Lakeside Courtyard, and blood prophet Meg Corbyn, see the new, closer companionship as beneficial—both personally and practically.

But not everyone is convinced. A group of radical humans is seeking to usurp land through a series of violent attacks on the Others. What they don’t realize is that there are older and more dangerous forces than shifters and vampires protecting the land that belongs to the Others—and those forces are willing to do whatever is necessary to protect what is theirs…

From Goodreads:
New York Times bestselling author Anne Bishop returns to her world of the Others, as humans struggle to survive in the shadow of shapeshifters and vampires far more powerful than themselves…

After a human uprising was brutally put down by the Elders—a primitive and lethal form of the Others—the few cities left under human control are far-flung. And the people within them now know to fear the no-man's-land beyond their borders—and the darkness…

As some communities struggle to rebuild, Lakeside Courtyard has emerged relatively unscathed, though Simon Wolfgard, its wolf shifter leader, and blood prophet Meg Corbyn must work with the human pack to maintain the fragile peace. But all their efforts are threatened when Lieutenant Montgomery's shady brother arrives, looking for a free ride and easy pickings.

With the humans on guard against one of their own, tensions rise, drawing the attention of the Elders, who are curious about the effect such an insignificant predator can have on a pack. But Meg knows the dangers, for she has seen in the cards how it will all end—with her standing beside a grave...

Humans are kinda pretty stupid in this world, and I can see how we are in this world, and how we can learn from it. We use too much, we want more than we need. The Others are just protecting the Earth and what's theirs. We have a proven track record that we don't. And that sucks.

The thing about these books, is that they're hilarious! The social mores of humanity don't make sense to the Others, and some hilarious antics ensue! Like four-play, and feeding vs. kissing. Or play prey. Or when Meg made the Elders ask please for the cookies. Just hilarious!

I really, really hope that we'll either have Meg and Simon in Lake Silence, at at the very least, have them mentioned, get some updates. Because it took 5 books to get them to the point where they finally kissed, and I just want more, so hopefully I'll get it!

Such great books, so enjoyable, and I can't wait for Lake Silence!