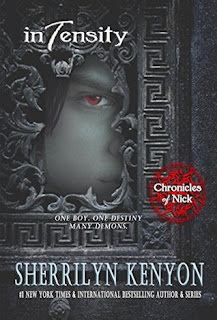 From Goodreads:
It's a demon-eat-demon world for Nick Gautier. Just when he thinks he's finally gotten a handle on how not to take over the world and destroy it, Death returns with an all-star cast that is determined to end the Malachai reign and lineage forever. Worse? Death and War have found the one, true enemy Nick can't find, and even if he did, it's one he could never bring himself to banish or kill.

Now framed for murders he hasn't committed, and surrounded by new friends who might be turncoats, Nick is learning fast how his father went down in flames.

The heat in New Orleans is rising fast, and Nick's threat-level has gone into a whole new level of intensity. He's learning fast that when War and Death decide to battle, they don't take prisoners. The don't negotiate. And they're both immune to his biting sarcasm and Cajun charm. To win this, he will have to embrace a new set of powers, but one wrong step, and he will belong to the side of Darkness, forever.

My Review:
This book was just so freaking fantastic! It's the last book in the Chronicles of Nick series, but then there's 4 books with Cyprien, and then 3 books in the Dark Hunter series with Nick as an adult. So we're not done with Nick, not at all!

I don't know what I was expecting, but wow, was it awesome! There were a few big confusing moments, like, what the heck was going on? Nick experienced getting run over-and then he was fine. It was confusing for us and Nick!

A big part of this book for me, was Cyprien. He's Nick's son-we don't know how, but Nick learns in this book-and we find out who his mom is in this book. Which explains Cyprien's motives, because man, his mom is awful!

Another big part of this book, was examining past relationships as they pertain to the now. Like, Braith and Kissare, who had the child who was the first Malacai, whose story we had in a previous book, but also means, that distantly, Nick is related to Acheron, since Braith is the name that Apollymi previously used. Braith and Kissare were just mentioned in Dragonsworn, I believe, and that Kissare's reincarnation could be Acheron's dad. Yeah. Heavy! Then there was Jaden, Xev, the lady whose name I can't remember, and Jared. Well, Jaden is Xev and Caleb's dad, and we got the story of why they think that Jared is their brother, too, in this book. Oh, the feels!

This was such a fantastic book, and that ending brought everything together, at least, the timeline makes sense, finally, it only took the end of this book! So great! I need more!

Author: Sherrilyn Kenyon
Series: Chronicles of Nick #8
Read: September 3rd, 2017
Source: NetGalley
Reason Why: Love her books and this series so much! And it's a End of Series 2017 Book and a Prequel & Sequel Challenge 2017 Book!
Publisher: Nemesis Publications
Published: September 5th 2017