Week 37 Reviews: Halfway to the Grave, One Foot in the Grave, At Grave's End, Destined for an Early Grave, Up From the Grave 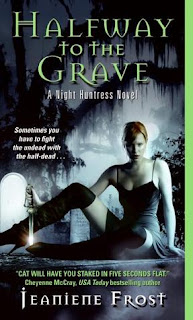 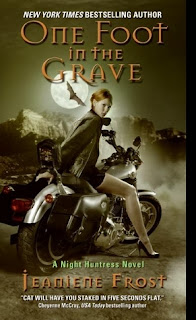 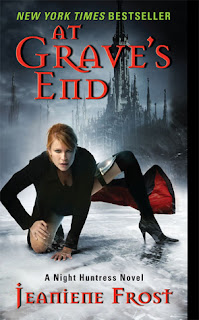 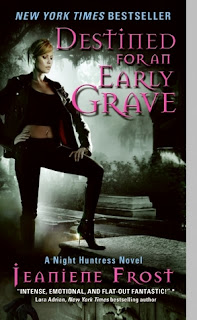 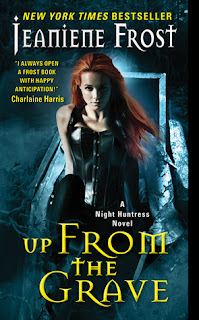 From Goodreads:
Flirting with the Grave...

Half-vampire Catherine Crawfield is going after the undead with a vengeance, hoping that one of these deadbeats is her father - the one responsible for ruining her mother's life. Then she's captured by Bones, a vampire bounty hunter, and is forced into an unholy partnership.

In exchange for finding her father, Cat agrees to train with the sexy night stalker until her battle reflexes are as sharp as his fangs. She's amazed she doesn't end up as his dinner - are there actually good vampires? Pretty soon Bones will have her convinced that being half-dead doesn't have to be all bad. But before she can enjoy her newfound status as kick-ass demon hunter, Cat and Bones are pursued by a group of killers. Now Cat will have to choose a side . . . and Bones is turning out to be as tempting as any man with a heartbeat.

From Goodreads:
You can run from the grave, but you can’t hide…

Half-vampire Cat Crawfield is now Special Agent Cat Crawfield, working for the government to rid the world of the rogue undead. She's still using everything Bones, her sexy and dangerous ex, taught her, but when Cat is targeted for assassination, the only man who can help her is the vampire she left behind.

Being around Bones awakens all her emotions, from the adrenaline rush of slaying vamps side by side to the reckless passion that consumed them. But a price on her head—wanted: dead or half-alive—means her survival depends on teaming up with Bones. And no matter how hard Cat tries to keep things professional between them, she'll find that desire lasts forever…and Bones won't let her get away again.

From Goodreads:
It should be the best time of half-vampire Cat Crawfield's life. With her undead lover Bones at her side, she's successfully protected mortals from the rogue undead. But though Cat's worn disguise after disguise to keep her true identity a secret from the brazen bloodsuckers, her cover's finally been blown, placing her in terrible danger.

As if that wasn't enough, a woman from Bones's past is determined to bury him once and for all. Caught in the crosshairs of a vengeful vamp, yet determined to help Bones stop a lethal magic from being unleashed, Cat's about to learn the true meaning of bad blood. And the tricks she's learned as a special agent won't help her. She will need to fully embrace her vampire instincts in order to save herself—and Bones—from a fate worse than the grave.

From Goodreads:
Her deadly dreams leave her in grave danger

Since half-vampire Cat Crawfield and her undead lover Bones met six years ago, they've fought against the rogue undead, battled a vengeful Master vampire, and pledged their devotion with a blood bond. Now it's time for a vacation. But their hopes for a perfect Paris holiday are dashed when Cat awakes one night in terror. She's having visions of a vampire named Gregor who's more powerful than Bones and has ties to her past that even Cat herself didn't know about.

Gregor believes Cat is his and he won't stop until he has her. As the battle begins between the vamp who haunts her nightmares and the one who holds her heart, only Cat can break Gregor's hold over her. She'll need all the power she can summon in order to bring down the baddest bloodsucker she's ever faced . . . even if getting that power will result in an early grave.

From Goodreads:
There's always one more grave to dig.

My Review:
I absolutely loved rereading these books! I didn't read books 5 and 6, which was weird, but I really wanted to read the first four for the 3rd time, and read Up From the Grave for the second time. I'm weird and different, but also great, too!

This was a spur of the moment decision, for me to read these books. It's been 3 years since Up From the Grave was published, and about the same time since I read the rest of the series for the 2nd time. I just wanted to read these books, so I did. I'm weird!

By now, you'd think, I'd have the big, major things memorised, of what happened. And yeah, I have a lot of major moments down. But some of the middle moments and the small moments, like when they are at the wedding, or when she thinks he's dead.

Of course, he has to do that again to her in Up From the Grave, and while I knew it was coming, man, it wasn't easy to read about Cat in that much pain! But there were some really great moments, like Vlad and Leila's wedding!

This was such a great series, and I really hope we'll met Timothy, the 4th Australian Prisoner turned vampire! Like, maybe he'll be Katie's guy!

Halfway to the Grave:

One Foot on the Grave:

Destined for an Early Grave: