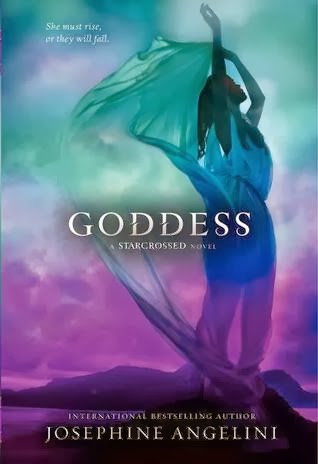 From Goodreads:
After accidentally unleashing the gods from their captivity on Olympus, Helen must find a way to re-imprison them without starting a devastating war. But the gods are angry, and their thirst for blood already has a body count.

To make matters worse, the Oracle reveals that a diabolical Tyrant is lurking among them, which drives a wedge between the once-solid group of friends. As the gods use the Scions against one another, Lucas’s life hangs in the balance. Still unsure whether she loves him or Orion, Helen is forced to make a terrifying decision, for war is coming to her shores.

In Josephine Angelini’s compelling conclusion to the masterfully woven Starcrossed trilogy, a goddess must rise above it all to change a destiny that’s been written in the stars. With worlds built just as fast as they crumble, love and war collide in an all-out battle that will leave no question unanswered and no heart untouched.

My first review of Goddess
My Review:
Oh, I just loved rereading this book! I mean, come on, it's the last book in the epic Starcrossed series, a series I have loved since the beginning, when I read the first 99 pages online, and had it end near the end of a sentence, and with just 3 words to complete it.

One thing that I thought, especially through the Matt parts, was, that he was the one that he was fighting, the Tyrant, because that was something I guess got stuck in my head when I was remembering this book from my first read.

One thing I'm still a bit confused on, was the roles that they filled. I'm pretty sure Helen was the Tyrant, Lucas the Lover, and Orion, the Shield, but I'm not sure, and that, I don't like, because yeah, it's the end of the series, and uncertainty over bits of it isn't fun.

I loved that we got to know more about the original Helen, and that life, and another of her lives, as Genevieve and Lancelot. Because yeah, that was just really great, and added something to the book, a more personal sense that this is the end of a story that has been going on for 1,000 years or more.

That her mom told the lie about Helen's dad, was because she'd seen Hades, and which of the boys he matched up with? Because she wanted her love back, and if her daughter was with the guy who replaced Hades, then she'd get him back. And because the boy who looked like Hades was Orion, that's why she didn't want Helen to be with Lucas. It was quite clever, dastardly planning. So yeah, it was a bit funny when it turned out that Lucas was the one who was going to replace Hades when he was ready.

I loved this book, it was really freaking great, and yeah, I can't wait for Trial by Fire!!!