Week 13 Reviews: The Warlord Wants Forever, A Hunger Like No Other 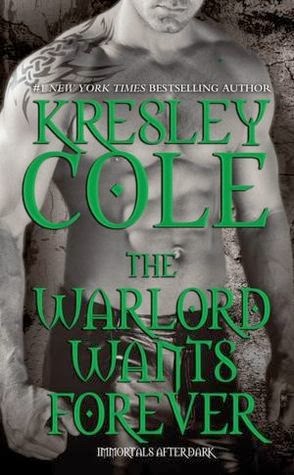 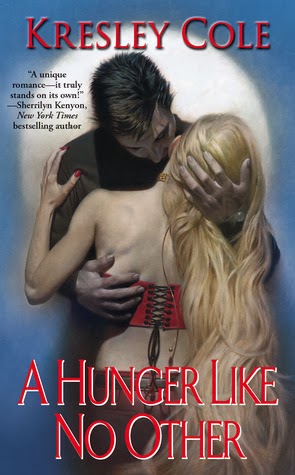 From Goodreads:
Nikolai Wroth, once a ruthless human warlord in the 1700s and now a general in the rebel vampire army, needs to find his bride, the one woman who can render him truly alive. As a turned human, he doesn't enjoy a heartbeat or breathing and is consequently weaker than fully blooded vampires. He wants his bride for the power she will bring him and can hardly believe it when his heart beats for Myst the Coveted, a mad, fey, mythological creature.

She eludes him for five years, but he has finally chased her to ground and stolen the jewel which commands her, giving him absolute power over her. While he possesses it, he can make her do anything, and he plans to in order for her to experience firsthand the agonizing, unending lust she'd purposely subjected him to for half a decade. Yet when Wroth realizes he wants more from her and frees her, will she come.

From Goodreads:
A mythic warrior who'll stop at nothing to possess her...

After enduring years of torture from the vampire horde, Lachlain MacRieve, leader of the Lykae Clan, is enraged to find the predestined mate he's waited millennia for is a vampire. Or partly one. This Emmaline is a small, ethereal half Valkyrie/half vampire, who somehow begins to soothe the fury burning within him.

A vampire captured by her wildest fantasy...

Sheltered Emmaline Troy finally sets out to uncover the truth about her deceased parents—until a powerful Lykae claims her as his mate and forces her back to his ancestral Scottish castle. There, her fear of the Lykae—and their notorious dark desires—ebbs as he begins a slow, wicked seduction to sate her own dark cravings.

Yet when an ancient evil from her past resurfaces, will their desire deepen into a love that can bring a proud warrior to his knees and turn a gentle beauty into the fighter she was born to be?

My Review:
Oh, my, these were freaking great books! I don't know why I didn't make time to read them before now, because I just lovedlovedloved them! Great characters, great world, and such snarky, sarcastic comments and mixed with pop culture! So good!!!

Romance. Since I'd classify their genre as paranormal romance, it is to be expected. But these books had excellent romance just bursting to the seems, and yet, not enough, because there could never be enough, yet a perfect amount. These 2 pairs, they had to happen. The world would've been poorer for it if they hadn't happened. So go, world, for having them!!!

The bad guys, Ivo, and the big head of the Horde, D (something, I forget his name) are defeated by the end, with lots of twists and turns, and while just the start of the series, they provide quite an in-depth look, because we have born-humans-turned-vampires group represented by Nikolai, born vampires kinda represented by Emmaline, the Valkyrie by Myst, and all the others, like Nix! And then finally, the lykae by Lachlain. So all in all, a very great start to the series!

I especially loved the one scene in Hunger, where the Valkyries attack the Lykae fortress, and then leave, it was just hilarious, and awesome, and just proves that Valkyries are the best!!!

These were excellent books, and I need to read more of the series, like, now!!!