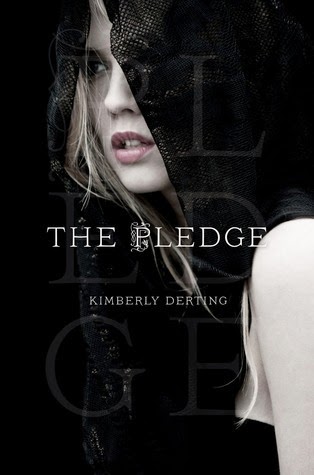 From Goodreads:
In the violent country of Ludania, the classes are strictly divided by the language they speak. The smallest transgression, like looking a member of a higher class in the eye while they are speaking their native tongue, results in immediate execution. Seventeen-year-old Charlaina has always been able to understand the languages of all classes, and she's spent her life trying to hide her secret. The only place she can really be free is the drug-fueled underground clubs where people go to shake off the oppressive rules of the world they live in. It's there that she meets a beautiful and mysterious boy named Max who speaks a language she's never heard before . . . and her secret is almost exposed.

Charlie is intensely attracted to Max, even though she can't be sure where his real loyalties lie. As the emergency drills give way to real crisis and the violence escalates, it becomes clear that Charlie is the key to something much bigger: her country's only chance for freedom from the terrible power of a deadly regime.

My first review of The Pledge
My Review:
I really enjoyed this book. Not as much as the last time, because while I wanted to read it knowing how it'd happen, knowing that lost a bit of the spark that made it so great. Here's to hoping that The Offering, when I read it, will have that spark!

We get Charlie, who's special in that she understands all languages, verbal, written, pictorial, and tactile. Which is pretty amazing, but dangerous in a world were people are segregated with language, and the more that you know, the higher up you are.

Oh, and that if you look at a person in the eye while they speak a higher language then you, then you can, and most often are, sentenced to death. Very harsh place. And that injustice, that's a great part of the spark that stayed with the book, because I hate injustice, and reading about it. Well, my family complains when I exclaim at these argh I want to destroy something moments, and yeah, this book had plenty of those!!!

This is just a really great book, and I can't wait to reread more of the series!!