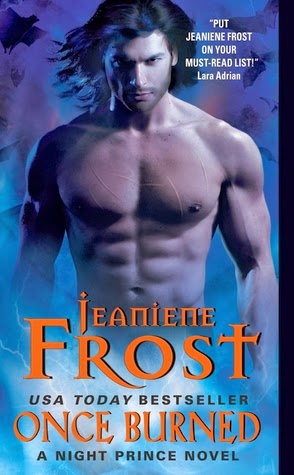 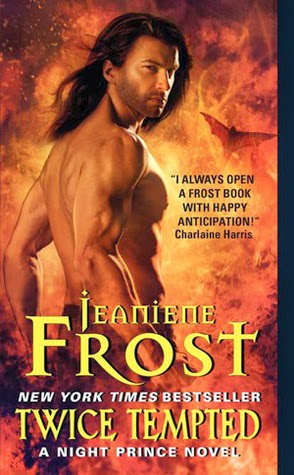 From Goodreads:
She's a mortal with dark powers...

After a tragic accident scarred her body and destroyed her dreams, Leila never imagined that the worst was still to come: terrifying powers that let her channel electricity and learn a person's darkest secrets through a single touch. Leila is doomed to a life of solitude...until creatures of the night kidnap her, forcing her to reach out with a telepathic distress call to the world's most infamous vampire...

He's the Prince of Night...

Vlad Tepesh inspired the greatest vampire legend of all—but whatever you do, don't call him Dracula. Vlad's ability to control fire makes him one of the most feared vampires in existence, but his enemies have found a new weapon against him—a beautiful mortal with powers to match his own. When Vlad and Leila meet, however, passion ignites between them, threatening to consume them both. It will take everything that they are to stop an enemy intent on bringing them down in flames.

From Goodreads:
Dating the Prince of Darkness has its challenges...

Leila's psychic abilities have been failing her, and now she isn't sure what the future holds. If that weren't enough, her lover, Vlad, has been acting distant. Though Leila is a mere mortal, she's also a modern woman who refuses to accept the cold shoulder treatment forever–especially from the darkly handsome vampire who still won't admit that he loves her.

Like choosing between eternal love and a loveless eternity...

Soon circumstances send Leila back to the carnival circuit, where tragedy strikes. And when she finds herself in the crosshairs of a killer who may be closer than she realizes, Leila must decide who to trust– the fiery vampire who arouses her passions like no other or the tortured knight who longs to be more than a friend? With danger stalking her every step of the way, all it takes is one wrong move to damn her for eternity.

My first review of Once Burned, Twice Tempted
My Review:
Oh, I loved these books, because they're Leila and Vlad's books, with a 3rd one to come sometime next year! And yeah, they were fantastic, great characters,  obviously, interesting, and great romance, and issues a typical couple faces (like jealousy) and atypical issues like the fact that he has a dungeon that he can torture people in, people that betray him, and he could read her thoughts when she was human. Yeah.

Loved Leila, she was strong and independent, and yeah, just likeable, and she'd been through a pretty hard life, being electrocuted, and because of that, her mom touched her and died, and then if she touches somebody, they're electrocuted, and if it's with a specific hand, then she could get impressions of the past-as in the not now. Yeah. Strong.

They had such a great romance, where she didn't take his caveman ways, and fought to be equal, and after she comes back in Tempted, there was a toilet in his bathroom, and yeah, that he did that before she left, and he thought that she wasn't going to leave. Yeah.

Or when he thought she was dead? And then they were talking and such, he thought he was hallucinating at first, but then quickly realized that she was alive, and that was just really great! Or when she actually died, and became a vampire? Yeah, that was pretty epic, because she was an awesome vampire!!

I loved these books and I can't wait for the 3rd book!!!