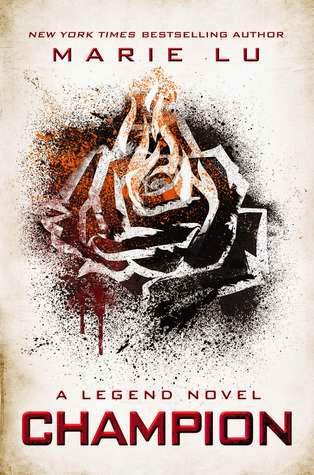 From Goodreads:
He is a Legend.

She is a Prodigy.

Who will be Champion?

June and Day have sacrificed so much for the people of the Republic—and each other—and now their country is on the brink of a new existence. June is back in the good graces of the Republic, working within the government's elite circles as Princeps-Elect, while Day has been assigned a high-level military position.

But neither could have predicted the circumstances that will reunite them: just when a peace treaty is imminent, a plague outbreak causes panic in the Colonies, and war threatens the Republic's border cities. This new strain of plague is deadlier than ever, and June is the only one who knows the key to her country's defense. But saving the lives of thousands will mean asking the one she loves to give up everything.

My Review:
Oh, how did I love this book? I don't think there's going to be enough words, because I mean, seriously, I don't know how long it took me to actually read Prodigy, and then I read this just the next week. Because yeah, by then, I really needed to know how this series ended!

Loved how they faced off with the if they loved each other thing, and it broke my heart, the pain he was in because she was involved in his mom's death. And how that effected their relationship, and not in a good way. Which is why this book and this series, was realistic, and why I enjoyed how the ending turned out!

Or how, that Eden's blood was part of finding the cure, and June's was the other-because of the sickness she had during Prodigy, which was pretty darn great storytelling! Added to the fact that Day was dying, and he didn't tell June, she had to find out when he was in the hospital.

And that ending? What with him not remembering her? So she lets him go, and he lives his life, and she lives hers, but then they meet again, and he's been remembering some things, and that they kinda have a fresh start? I just really loved that, it was a really great ending!

Wow, did I love this book, and I can't wait to see what Marie Lu writes next, because this was a spectacular series!