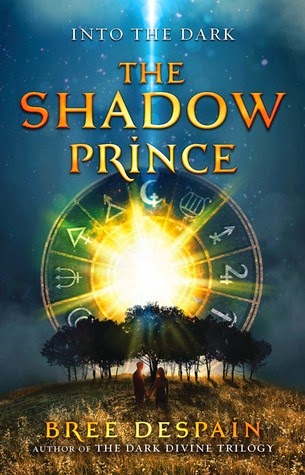 From Goodreads:
Haden Lord, the disgraced prince of the Underrealm, has been sent to the mortal world to entice a girl into returning with him to the land of the dead. Posing as a student at Olympus Hills High—a haven for children of the rich and famous—Haden must single out the one girl rumored to be able to restore immortality to his race.

Daphne Raines has dreams much bigger than her tiny southern Utah town, so when her rock star dad suddenly reappears, offering her full tuition to Olympus Hills High's prestigious music program, she sees an opportunity to catch the break she needs to make it as a singer. But upon moving into her estranged father's mansion in California, and attending her glamorous new school, Daphne soon realizes she isn't the only student in Olympus who doesn't quite belong.

Haden and Daphne—destined for each other—know nothing of the true stakes their fated courtship entails. As war between the gods brews, the teenagers' lives collide. But Daphne won't be wooed easily and when it seems their prophesied link could happen, Haden realizes something he never intended—he’s fallen in love. Now to save themselves, Haden and Daphne must rewrite their destinies. But as their destinies change, so do the fates of both their worlds.

My Review:
I really enjoyed this book! Most of the review is the history that the Underworld has in this book, because I found it to be a pretty important part of the book! It was really great, a retelling, or continuation of the Persephone and Hades myth, that they existed, that something happened that she came to the underworld for fall and winter, and back to Earth for spring and summer. But that Orpheus stole Hades source of immortality, and he died, and other stuff happens.

I loved the whole myth, and the lords that were made by Hades, and then kidnapped by the "Sky lord" and then when Hades sent previous creations to get the twins back, but since Life was bleeding, he was torn apart by the previous creations, and Death was brought back-and Haden was the descendent of him. And Lie was put back, and yeah, became the enemy, and that spawned a war that Apollo tried to end the war, but then yeah, without his immortality, Hades was killed, and since his immortality was also the key to the gates, those gates were closed. Yeah, I really enjoyed the back story!

Which brings us to the Champion, who goes up to our world, though Persephone's gate, that only opens up now, and only a few people can get through, so that's why the war (between the Under Lords and the Sky Lords) and when Haden becomes the Champion, that causes some trouble.

Because Haden was shamed, because he cried when his mom was dying, and then attacked his dad-and this was when he was 7. And his twin brother became the favourite of their dad, the ruler of the Underworld, even though he isn't a god. But that's why the Champion's task is so important-to find Hades key thing.

I enjoyed all these characters, from Daphne, who's had a missing dad most of her life, Haden, who obviously has issues with his dad and twin brother, Haden's cousin, his half brother, Daphne's dad, Joe, these were real people, even if we didn't get to know all of them quite well.

I loved the mystery for Daphne, and her friend, about the Underworld, because really, who'd guess that? And then how that connects to her friend, CeCe, and how CeCe is connected to her friend, and that's why they had similar inner songs that Daphne hears. Because yeah, Daphne is the one who can find the key because it's her ancestor, Orpheus who stole it, and she has his heart and soul. Yeah. And she's the one that Haden's supposed to take to the Underworld as a boon, but really the Cypher.

I really, really enjoyed this book, and I'm really excited about the next book!