Week 31 Reviews: I Married the Duke, Kisses, She Wrote 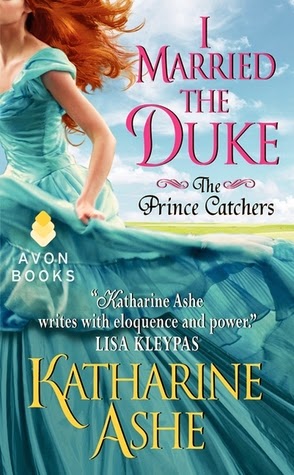 From Goodreads:
Three very different sisters beguile society with their beauty and charm, but only one of them must fulfill a prophecy: marry a prince. Who is the mystery Prince Charming, and which sister will be his bride?

On the way to marry a prince in a castle, a lady should never:

1. Bribe an infuriatingly arrogant and undeniably irresistible ship captain,
2. Let him kiss her senseless on a beach,
3. Battle thieves at his side,
and
4. Exchange wedding vows with him, even under the direst circumstances.


But daring, determined Arabella Caulfield isn't just any lady. And Luc Westfall is no typical ship captain. He's the new Duke of Lycombe, and to defeat a plot that could destroy his family he must have an heir. Now he knows just the woman for the job . . . and he’s not above seduction to turn this would-be princess into a duchess.

From Goodreads:
Christmas in town has never been so steamy . . .

Handsome as sin and scandalously rakish, Cam Westfall, the Earl of Bedwyr, is every young lady's wickedest dream. Shy wallflower Princess Jacqueline of Sensaire knows this better than anyone, because her dreams are full of the breathtaking earl's kisses. And not only her dreams—her diary, too.

But when Cam discovers the maiden's not-so-maidenly diary, will her wildest Christmas wishes be fulfilled in its pages . . . or in his arms?

My Review:
These were fantastic books! I loved how the novella continued the world, how Princess Jacqueline was the one Arabella was hired to bring into society, and the Earl of Bedwyr, is Luc's cousin! Loved that, and yeah, then I had to read Ravenna's story!

I loved these characters, they had flaws (Luc accused Cam of improper relations with a girl, and they got into a duel, in which Luc lost his eye) and Arabella, for the times, had quite a mouth on her when she let it loose, which Luc caused her to do a lot, and she said some really funny things sometimes!

I really enjoyed the romance in both books, from the bantering in the first, to the coaxing, and the encouragement of the novella, because both suited all the characters involved, and yeah, it was romance, so it was romantic!

And there were little mysteries, too, because Luc was inheritance a Duke-ship, and the guy who pretty much raised him, was sexually abusive, and the old duke's best friend, and was in partial control of the estate until the wife either lost the baby or it was girl, and if it was a boy, the guy would rule in the boy's stead until he grew up. So yeah, mystery in that!

Really enjoyed these stories, and then I had to read more, and now I really want the 3rd book!

I Married the Duke: