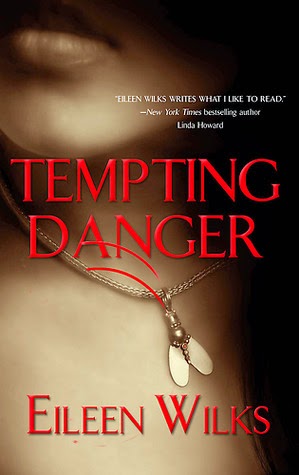 From Goodreads:
This free short story takes places in Rule's past, specifically January 10, 1976 during his Sophomore year of high school in a small town near Clanhome. It's a fun look into a time when Rule wasn't Lu Nuncio yet and was just learning how to integrate with humans.

From Goodreads:
National bestselling author Eileen Wilks draws readers into a bold new world where the magical and mundane co-exist in an uneasy alliance--and a cop balanced on her own knife-edged struggle is their only hope against a cold-blooded killer.

Lily Yu is a San Diego police detective investigating a series of grisly murders that appear to be the work of a werewolf. To hunt down the killer, she must infiltrate the clans. Only one man can help her--a were named Rule Turner, a prince of the lupi, whose charismatic presence disturbs Lily. Rule has his own reasons for helping the investigation--reasons he doesn't want to share with Lily. Logic and honor demand she keep her distance, but the attraction between them is immediate and devastating-and beyond human reason. Now, in a race to fend off evil, Lily finds herself in uncharted territory, tested as never before, and at her back a man who she's not sure she can trust.

My Review:
I really enjoyed these stories! They were in a very complex world, and at times, I had to reread things, because I didn't quite get what was going on, what the terms meant, but once things made sense to me, it was a really intricate world that was wholly enjoyable! Though we don't get what he name was, if in French like we did in Only Human.

I read these because I recently reread Only Human in the Lover Beware anthology, and it sparked this. Tempting Danger is a full length novel that was inspired by the novella, and the opening is almost the same, and Tempting has a few lines from Only Human, but these are 2 different stories, Tempting is expanded, she has a cat instead of a dog, and he doesn't go to Grandmother's 80 birthday party because it didn't happen. Oh, and he only has 1 son, the one with the reporter, not the one with the fellow Nokolai mother. Though I really enjoyed the look that we got of Rule as a kid, in the short story, it was really great!

But the most important change is all the magic-Lily's a sensitive, and she can feel magic, know if a person is Gifted or of the Blood (I don't really get the difference, really) and the witches and shamans, and sorcerers, which was outlawed, and was Purged some time ago, which I hope we'll get in greater detail later!

And we get a few new characters in this book, we get to met both of his brothers, and the 2 FBI agents, and Max, and I think most importantly, Cullen Seabourne, a lupus sorcery, who was kicked out of his clan for refusing to give up his sorcery powers.

I'll admit to being lost a few times, and there were a lot of investigative threads that I forgot about, and then a few that I remembered that didn't quite close-which lupi was used to kill the first victim? Because she would've felt it if Helen did it, and I know it's probably one of the Leidolf clan, but I'd like to know which one, and how they got connected to the crazies!

Really enjoyed these stories, and now I have to read the rest of the series!