Week 40 Review: Every Which Way But Dead 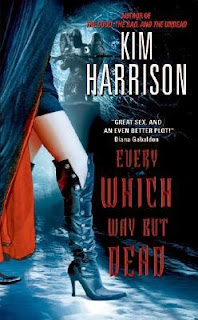 From Goodreads:
There's no witch in Cincinnati tougher, sexier, or more screwed up than bounty hunter Rachel Morgan, who's already put her love life and soul in dire jeopardy through her determined efforts to bring criminal night creatures to justice.

Between "runs," she has her hands full fending off the attentions of her blood-drinking partner, keeping a deadly secret from her backup, and resisting a hot new vamp suitor.

Rachel must also take a stand in the war that's raging in the city's underworld, since she helped put away its former vampire kingpin - and made a deal with a powerful demon to do so that could cost her an eternity of pain, torment, and degradation.

And now her dark "master" is coming to collect his due.

My first review of Every Which Way But Dead
My Review:
I loved this book. I mean, I've read it before, but yeah, I loved this book! Things are pretty much done with Nick, and knowing what I know of future books, this is a good thing! And this is the first book where I noticed when Jenks uses his Tink swears!

I had forgotten that Jenks got mad at Rachel about not telling him that Trent was an elf. I had forgotten that it was a pretty big deal, seeing as in The Undead Pool, like, everyone knows that the elves made it through the Turn. But yeah, it was a big deal here, and yeah, I can't wait to get to Charms and have Rachel and Jenks make up!

And amazed how I am, again, how one event in a previous book, where things ended quite nicely, is turned on its head, and made into a bigger problem then it was before! Though not too much in this one, the main thing was the deal that Rachel would be Al's familiar. But then this one sets up a few more, by taking away one of Al's marks, and gaining one of Newt's. Yeah.

Things develop between Rachel and Kisten, and that's great, even if he's going to die, because like Trent says later on, Kisten is an interesting choice, date wise. And while I'll be sad to see him go very shortly, they did have a good time together, and he helps her be the person she is right to the end, I'm betting!

Favourite lines: "Coffee? We had just escaped a demon, and I'm offering her coffee?" Yeah, it's strange, but it's your life! "How on earth could yo marry a pixy? Why on earth would you want to?" Well, pixy's want to marry other pixy's! "I wish I could say it was neatness, but when I had a run, I ran it. I didn't analyse it to death." Which is an image! "He's old and on a fixed income. What more is there to know?" Uh, what job he had, family, history? "But upon seeing the delicate woman standing in pink fuzzy slippers beside the microwave in her elegant ball gown with a folder of steaming fries, I could understand why." Yeah, that doesn't come together very well! "I am a stumbling stone in a fortress of soldiers. I'd be honored to stay with the retired warrior and ease his hurts." That's a way to say it! "But it was either that or have them set up housekeeping in the kitchen cupboards. No. Not my kitchen. Having them sage daily mock battles among the pots and utensils was bad enough." Yeah, sounds like it! "I forgot my name, Rache." Yeah, that's not good for the ego, but you were starstruck! "Rachel! It's my kids!" Yeah, of course the sneak attack was your kids! "So does Bozo the Clown, but I wouldn't date him." Yeah, making someone laugh isn't enough to win a date! "Jenks ate it." And there goes bye bye the wishing fish! "Look. I don't like you. Jenks doesn't like you. And Ivy wants to eat you. Start talking." Yeah, it'd be best to do what she says! "They were line dancing. Oh-my-God The vampires were line dancing." Which is really weird! "'Snap, crackle, pop.' 'I beg your pardon?' 'Snap, crackle, pop. Bringing them down sounded like a bowl of cereal." Agreed! And I like rice crispies! "'Who was it?' 'Nobody.' 'Nick?' 'Like I said, nobody.'" Yes, he deserves that! "Oh, yeah. A cookie. That would make everything better. Dunked in a shot of tequila. maybe? Or better yet, just the bottle? Yeah, that ought to do it." Yeah, not a awkward situation at all! "Maybe I should move to Timbuktu, or the Tennessee mountains, or somewhere else where there weren't any vampires. (Don't ask. It's weird even for Inderlanders-which is saying a lot.)" Yeah, it is saying a lot! "She's supposed to wear them until Dad says so. And at this rate, she's going to be thirty before that happens." Yeah, shouldn't be throwing them away! "'You did eat it?' " Yeah. WE ate it. Are we going to be all right?'" Why would a wishing fish affect you? "My muscles hurt. Hell, everything hurt. And I hadn't liked my head being in David's mouth at all." Yeah, that wouldn't be fun! "Yeah. Babysitting Rachel is what I do third best." And we don't want to know what you do first and second best, Jenks! "

Yeah. It's so good, and so awesome to love, and I can't wait to reread more, and then finally, finally read The Witch With No Name!!