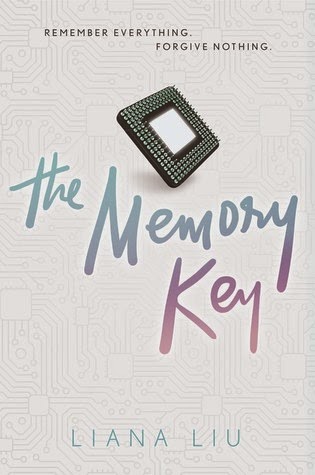 From Goodreads:
In a five-minutes-into-the-future world, a bereaved daughter must choose between losing memories of her mother to the haze of time and the reality-distorting, visceral pain of complete, perfect recall.

Lora Mint is determined not to forget.

Though her mother's been dead for five years, Lora struggles to remember every detail about her—most importantly, the specific events that occurred the night she sped off in her car, never to return.

But in a world ravaged by Vergets disease, a viral form of Alzheimer's, that isn't easy. Usually Lora is aided by her memory key, a standard-issue chip embedded in her brain that preserves memories just the way a human brain would. Then a minor accident damages Lora's key, and her memories go haywire. Suddenly Lora remembers a moment from the night of her mother's disappearance that indicates her death was no accident. Can she trust these formerly forgotten memories? Or is her ability to remember every painful part of her past driving her slowly mad—burying the truth forever?

Lora's longing for her lost mother and journey to patch up her broken memories is filled with authentic and poignant emotion. Her race to uncover the truth is a twisty ride. In the end, Liana Liu's story will spark topical conversations about memory and privacy in a world that is reliant on increasingly invasive forms of technology.

My Review:
Reading this book, I'm so glad that I did! I mean, I just read Killer Instinct and Killer Within, but once I was done, I opened a lot of books up, and didn't get very far into them before I had to move to another one. Then I got to this book, and the pages flew!

The idea of the memory key, pretty awesome. Sucks that to have a perfect memory, that would would be in pain. But that a company would in control of that, well, that was not a good idea at all! Of course they would misuse that power!

There was the whole economical bill, and people were arguing about it, how the liberals wanted it, and the conservatives didn't, but we weren't told what exactly it did. Just that the economy was crappy, and there weren't a lot of jobs. And that was a running plot through the book. Why some characters did what they did.

It really sucks for Lora, because with the perfect memory for a while, all the little annoyances came up, and together, and caused conflict. And her mom, and the mystery there, and how that ended, was just not fun at all! It wasn't resoled, but it was on the way there. Just had to expose it, and until then, live with it. And that sucks, but there were things to look forward to!

I enjoyed this a lot, it was a really great book! And I'd love a companion book, just to see the fallout! Like her best friend! That would be so awesome!