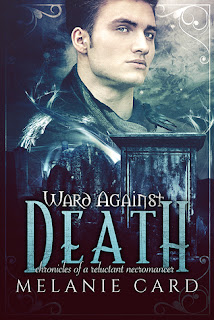 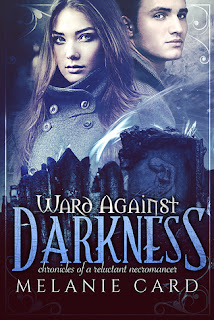 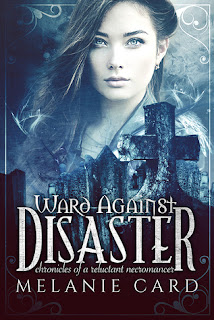 From Goodreads:
Twenty-year-old Ward de'Ath expected this to be a simple job—bring a nobleman's daughter back from the dead for fifteen minutes, let her family say good-bye, and launch his fledgling career as a necromancer. Goddess knows he can't be a surgeon—the Quayestri already branded him a criminal for trying—so bringing people back from the dead it is.

But when Ward wakes the beautiful Celia Carlyle, he gets more than he bargained for. Insistent that she's been murdered, Celia begs Ward to keep her alive and help her find justice. By the time she drags him out her bedroom window and into the sewers, Ward can't bring himself to break his damned physician's Oath and desert her.


However, nothing is as it seems—including Celia. One second, she's treating Ward like sewage, the next she's kissing him. And for a nobleman’s daughter, she sure has a lot of enemies. If he could just convince his heart to give up on the infuriating beauty, he might get out of this alive…

From Goodreads:
The last thing Ward de'Ath wants is more trouble. On the run from both the law and the criminal underworld, Ward and Celia flee Brawenal City only to stumble into the mansion of a powerful evil necromancer. And when Ward discovers the man possesses a dangerous grimoire, his duty leaves him no choice. He can't allow the necromancer to keep the grimoire. But the mansion is filled with monsters--human and undead--and Ward has no way of telling who's friend or foe. The only person he can trust is Celia who dominates more of his thoughts and feelings everyday. But there are still laws in the way of anything but friendship. She's still dead and he's still alive . . . for now.

From Goodreads:
Ward de'Ath should be dead by now. Instead, he's chasing after a soul-eating creature—that he unleashed— and is bent on stopping her before she slaughters more innocents. Fortunately, Celia Carlyle remains by his side, a nobleman's gorgeous and deadly daughter, who is…well, dead. Celia claims she'll champion Ward wherever he goes, even when she thinks his quest is hopeless. He can only hope her pledge comes from her heart, and not because she's bound to him through his magic. When they enter Dulthyne, they stumble upon a dark power that threatens the entire town. Ward, with his unreliable necromancy, is determined to help but finds himself ensnared in the lure of white-hot magic…blood magic he struggles to resist. But if Celia's love is a lie, it might just doom his soul to the dark arts forever.

My Review:
These were some really fantastic books to read! I feel a bit sorry for those that started this series with the first book when it first came out, because then the had the 2ish years wait between each book thus far! And I didn't, I got to read them back to back! So great!

I really enjoyed watching both Ward and Celia grow through these books. He was a bit of a bumbling weakling, and she was a hidden cold blooded warrior creature, and they both were more than that, and they grew through this series, which was really great!

There were some really strange things happening, since this is a world of magic where surgery is illegal, and yet, when I mean strange, it's what these characters are going through, that's different from the strange world to us readers that they live in!

For me, there were two big things through these books that were a bit interrelated. First, what was Celia, from being dead, and having Ward bring her back, then the kinda botched attempt later on. And then his power, because he wasn't weak, but it was pretty strange!

Such a great series, with magic, and tempting forbidden romance, very little communication, and mystery, and with such a cliff hanger ending of Disaster! I want to read more! 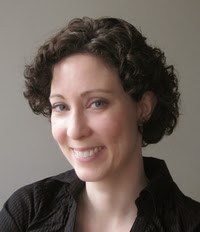 Bio:
I have always been drawn to story telling. In fact, I can’t remember a time when I wasn’t telling a story in my head or on paper. In grade school, we had journal writing time which I turned into story telling time, weaving tales of magic and adventure that mimicked the fairy tales and myths that I loved to read. It was there, with the help of two very special teachers, that I nurtured this love and started my journey as a writer.

I write fantasy, paranormal romance, and everything in between, seasoned with a good dash of adventure and mystery. Join me on my tales of magic, adventure, and romance.