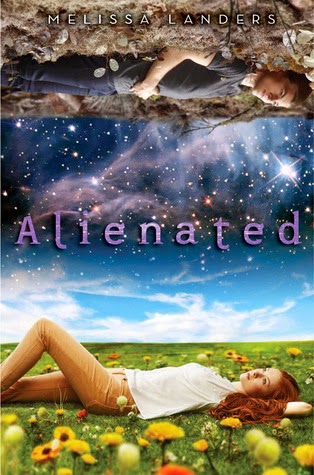 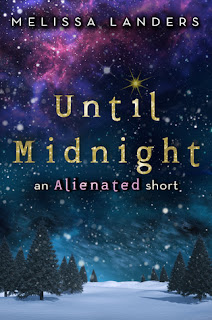 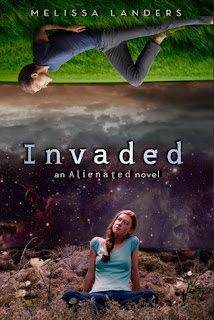 From Goodreads:
Two years ago, the aliens made contact. Now Cara Sweeney is going to be sharing a bathroom with one of them.

Handpicked to host the first-ever L'eihr exchange student, Cara thinks her future is set. Not only does she get a free ride to her dream college, she'll have inside information about the mysterious L'eihrs that every journalist would kill for. Cara’s blog following is about to skyrocket.

Still, Cara isn’t sure what to think when she meets Aelyx. Humans and L'eihrs have nearly identical DNA, but cold, infuriatingly brilliant Aelyx couldn’t seem more alien. She's certain about one thing, though: no human boy is this good-looking.

But when Cara's classmates get swept up by anti-L'eihr paranoia, Midtown High School suddenly isn't safe anymore. Threatening notes appear in Cara's locker, and a police officer has to escort her and Aelyx to class.

Cara finds support in the last person she expected. She realizes that Aelyx isn't just her only friend; she's fallen hard for him. But Aelyx has been hiding the truth about the purpose of his exchange, and its potentially deadly consequences. Soon Cara will be in for the fight of her life—not just for herself and the boy she loves, but for the future of her planet.

From Goodreads:
Cara and Aelyx only have one day to spend together before he returns to earth and she travels to Aelyx's home planet, L'eihr. Homesick and worried about the upcoming year apart, Cara is desperate to make these final hours count. Worst of all, Cara is missing Christmas, stuck on board an alien spaceship. When Aelyx learns that Cara is forgoing her favorite holiday, he tries to recreate Christmas in space by researching traditional earth customs…but a few things get lost in translation.

From Goodreads:
The romantic sequel to Alienated takes long-distance relationships to a new level as Cara and Aelyx long for each other from opposite ends of the universe...until a threat to both their worlds reunites them.

Cara always knew life on planet L'eihr would be an adjustment. With Aelyx, her L'eihr boyfriend, back on Earth, working to mend the broken alliance between their two planets, Cara is left to fend for herself at a new school, surrounded by hostile alien clones. Even the weird dorm pet hates her.

Things look up when Cara is appointed as human representative to a panel preparing for a human colony on L'eihr. A society melding their two cultures is a place where Cara and Aelyx could one day make a life together. But with L'eihr leaders balking at granting even the most basic freedoms, Cara begins to wonder if she could ever be happy on this planet, even with Aelyx by her side.

Meanwhile, on Earth, Aelyx, finds himself thrown into a full-scale PR campaign to improve human-L'eihr relations. Humans don't know that their very survival depends on this alliance: only Aelyx's people have the technology to fix the deadly contamination in the global water supply that human governments are hiding. Yet despite their upper hand, the leaders of his world suddenly seem desperate to get humans on their side, and hardly bat an eye at extremists' multiple attempts on Aelyx's life.


The Way clearly needs humans' help . . . but with what? And what will they ask for in return?

My Review:
Reading these books was really great! I really enjoyed reading the both of them so much, and the short story in between, these characters were fantastic to read about, and their adventures were just great and thrilling and just so readable!

One thing that I found utterly fantastic, was in Until Midnight, and Aelyx mixed up some pretty important names-he called Santa, Satan. And while they have the same letters, just in different order, well, I just found this pretty hilarious, and her reaction, too! So awesome!

I did like Alienated just a little bit more than Invaded for a simple reason-Cara and Aelyx were together in Alienated, and spend hardly any time together in Invaded. Which is too bad, but it was different, besides the fact that Invaded had a real bad guy to face, vs. a faceless mob!

I absolutely love the fact that Invaded could be the end of the series-or it might not. Things are left in a place where things are getting better, but there's clouds on the horizon-they didn't catch the bad guy, there's the aliens that moved the L'eihr from Earth (love that it was this way, instead of the other way around!), and Aelyx's un-communicated worries about Cara's higher status then him, seeing as she's now on The Way.

Really fantastic books, I don't know how I lasted so long without reading them!