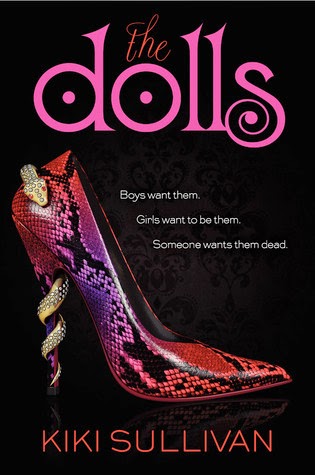 From Goodreads:
Eveny Cheval just moved back to Louisiana after spending her childhood in New York with her aunt Bea. Eveny hasn't seen her hometown since her mother's suicide fourteen years ago, and her memories couldn't have prepared her for what she encounters. Because pristine, perfectly manicured Carrefour has a dark side full of intrigue, betrayal, and lies—and Eveny quickly finds herself at the center of it all.

Enter Peregrine Marceau, Chloe St. Pierre, and their group of rich, sexy friends known as the Dolls. From sipping champagne at lunch to hooking up with the hottest boys, Peregrine and Chloe have everything—including an explanation for what's going on in Carrefour. And Eveny doesn't trust them one bit.

But after murder strikes and Eveny discovers that everything she believes about herself, her family, and her life is a lie, she must turn to the Dolls for answers. Something's wrong in paradise, and it's up to Eveny, Chloe, and Peregrine to save Carrefour and make it right.

My Review:
Ooh, I enjoyed this book a lot! And I'm lucky in reading it when I did, because the next book's coming out just next month! So yeah, that was a stroke of luck for me, because then I don't have to wait long for more!

I really enjoyed the world in this book, of the magic that they had, and how everything worked, and I'm excited, too, because we only saw a part of it, there's her dad's magic, and I can't wait for that! I know it's going to be great!

This, for me, was a bit of a book about power, who has it, and who doesn't, and how those with it, treat those who don't have it. And in this case, those with power are pretty much a-holes, since they took vitality from the poorer side of town, to finance their rich lives. Which is pretty horrible.

It sucked who the bad guy was, because he was supposed to be a friend, but the whole time, he was just preparing to kill her. And that's pretty horrible. And the whole situation messed up her friendship with his girlfriend.

I can't wait to read more of this series, learn more about her dad, and the relationship that she has with Caleb!