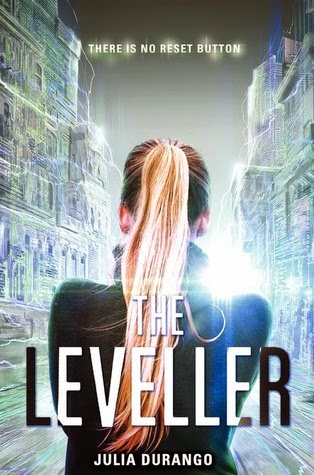 From Goodreads:
Nixy Bauer is a self-made Leveller. Her job? Dragging kids out of virtual reality and back to their parents in the real world. It's normally easy cash, but Nixy's latest mission is fraught with real danger, intrigue, and romance.

Nixy Bauer is used to her classmates being very, very unhappy to see her. After all, she's a bounty hunter in a virtual reality gaming world. Kids in the MEEP, as they call it, play entirely with their minds, while their bodies languish in a sleeplike state on the couch. Irritated parents, looking to wrench their kids back to reality, hire Nixy to jump into the game and retrieve them.

But when the game's billionaire developer loses track of his own son in the MEEP, Nixy is in for the biggest challenge of her bounty-hunting career. Wyn Salvador isn't some lazy kid looking to escape his homework: Wyn does not want to be found. And he's left behind a suicide note. Nixy takes the job but quickly discovers that Wyns not hiding—he’s being held inside the game against his will. But who is holding him captive, and why?

Nixy and Wyn attempt to fight their way out of a mind game unlike any they've encountered, and the battle brings them closer than either could have imagined. But when the whole world is virtual, how can Nixy possibly know if her feelings are real?

Gamers and action fans of all types will dive straight into the MEEP, thanks to Julia Durango's cinematic storytelling. A touch of romance adds some heart to Nixy's vivid, multidimensional journey through Wyn's tricked-out virtual city, and constant twists keep readers flying through to the breathtaking end.

My Review:
I enjoyed this book a whole ton load! And I'm so glad that this book is a series, because this book, it was a great introduction, but we were mostly in Wyn's virtual city, and after the revelations of this book, well, something bigger is coming!

Yeah, this was a great intro to the series, because we got introduced to this world, the broad points, and then some pretty specific, but with limited scope, things of this world, so we weren't overwhelmed with details. And it worked out so well! Plus, the adventure they had!

The maze that was built to keep Wyn in, full of fears, from the sharks to the screaming lady, yeah, that was pretty freaky! And that she died over and over there! That sucked, but she did get through it, even if that got her stuck!

Though there is one thing against Wyn's hope for his grandmother. Because the point that Nixy had of ordinary people upgrading their avatar, and then coming back to their imperfections, wouldn't that be like a hundred-fold, if for a person in a wheelchair, if they could walk in MEEP, and then come back to their bodies? It kinda has the feel of the question of to love and lose, or to not love and not feel the pain of losing. You know?

This was a really fantastic and enjoyable book, and it has the perfect set up for the sequel, I want to know more about the hacker group, the real one, and Wyn's dad, because that's where the big conflict's going to be, I just know it!