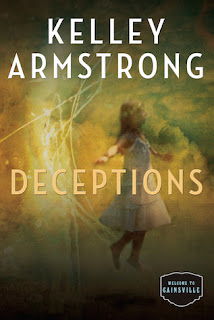 From Goodreads:
Olivia's life has exploded. She's discovered she's not only adopted, but her real parents are convicted serial killers. Fleeing the media frenzy, she took refuge in the oddly secluded town of Cainsville. She has since solved the town's mysteries and finds herself not only the target of its secretive elders, but also her stalker ex-fiancé.

Visions continue to haunt her: particularly a little blond girl in a green sundress who insists she has an important message for Olivia, one that may help her balance the light and darkness within herself. Death stalks Olivia and the two men most important to her, as she desperately searches to understand whether ancient scripts are dictating their triangle. Will darkness prevail or does Olivia have the power to prevent a tragic fate?

My Review:
Oh, man, this book! So much happens in it, and things are learned, and yeah, it was just another fantastic installment in this series! Loved it so much, and I just really want more, even if we have to wait another year for Betrayals!

After the ending of the last book, of her reading her biological dad's letter, reading this book was utterly fantastic! It was so excellent that it picked up almost immediately after, and I just dove into the pages, into this wonderful story!

The whole love triangle, and the little girl in the green sundress, we finally get the full story there! And how it's connected to Olivia. And that is utterly fantastic! And this is just one of the mysteries that gets solved in this book!

The other, is the truth about the murders that her parents were charged for. There were a lot of twists and turns, but when we got to the end, I think that was the best possible outcome under the circumstances! And just so utterly fantastic to read!

Gabriel did have some not so great points in this book, like when he was told of his role in the triangle, even if things have changed since the original time it played out! Or when he was charged with the murder of her ex-fiancé. Though her stake out of the police station was pretty funny!

Another book, another bad guy dealt with! And now I just want to know what's going to happen next!