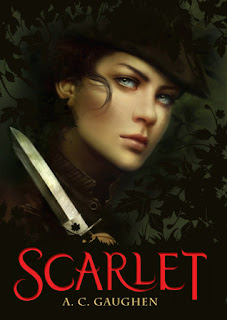 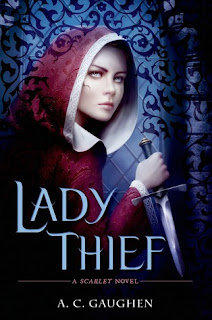 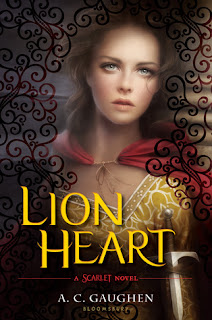 From Goodreads:
Many readers know the tale of Robin Hood, but they will be swept away by this new version full of action, secrets, and romance.

Posing as one of Robin Hood's thieves to avoid the wrath of the evil Thief Taker Lord Gisbourne, Scarlet has kept her identity secret from all of Nottinghamshire. Only the Hood and his band know the truth: the agile thief posing as a whip of a boy is actually a fearless young woman with a secret past. Helping the people of Nottingham outwit the corrupt Sheriff of Nottingham could cost Scarlet her life as Gisbourne closes in.

It's only her fierce loyalty to Robin—whose quick smiles and sharp temper have the rare power to unsettle her—that keeps Scarlet going and makes this fight worth dying for.

From Goodreads:
Scarlet's true identity has been revealed, but her future is uncertain. Her forced marriage to Lord Gisbourne threatens Robin and Scarlet's love, and as the royal court descends upon Nottingham for the appointment of a new Sheriff, the people of Nottingham hope that Prince John will appoint their beloved Robin Hood. But Prince John has different plans for Nottingham that revolve around a fateful secret from Scarlet's past even she isn't yet aware of. Forced to participate at court alongside her ruthless husband, Scarlet must bide her time and act the part of a noblewoman—a worthy sacrifice if it means helping Robin's cause and a chance at a future with the man she loves. With a fresh line of intrigue and as much passion as ever, the next chapter in Scarlet's tale will have readers talking once again.

From Goodreads:
The eagerly-awaited conclusion to the Scarlet trilogy delivers another action-packed and romance-filled adventure.

Scarlet has captured the hearts of readers as well as the heart of Robin Hood, and after ceaseless obstacles and countless threats, readers will finally find out the fate of the Lady Thief.

Imprisoned by Prince John for months, Scarlet finds herself a long way from Nottinghamshire. After a daring escape from the Prince's clutches, she learns that King Richard's life is in jeopardy, and Eleanor of Aquitaine demands a service Scarlet can't refuse: spy for her and help bring Richard home safe. But fate—and her heart—won't allow her to stay away from Nottinghamshire for long, and together, Scarlet and Rob must stop Prince John from going through with his dark plans for England. They can not rest until he's stopped, but will their love be enough to save them once and for all?

My first review of Scarlet
My Review:
I loved reading this series all together! Such great, amazing books! So enjoyable, so fantastic, I just devoured these books! Loved being in this world again with these characters, though they definitely when through some pretty darned hard times in these books!

Like when Prince John chops off two of Scarlet's fingers. Or when Little John dies. Or when Scarlet's held captive with little food or water, and no sun. That was hard. But Scarlet, Robin and the others were stronger, and they won in the end!

The revelation about Scarlet's parents? That her dad is King Richard the Lionhearted. Which makes Eleanor of Aquitaine her Grandmother, yeah. that was a revelation! And even before that, how Scarlet was changing, revealing more of herself, and the way her speech changed, so great to read that!

I really enjoyed their wedding, that was really special, and funny, that they kept it a secret and all the running and hiding, and then having it in the tree that Gisbourne tried to burn down. That was special, and it was so great to have her Grandmother there, and Rob talking about how her dad was going to react. Yeah, so great!

Loved this series so much, it ended on a really great note, and it was just so enjoyable, and I loved it! Can't wait to read more of A.C. Gaughen's books!